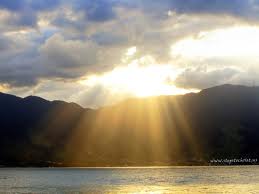 Mormon 3:3 And I did cry unto this people, but it was in vain; and they did not realize that it was the Lord that had spared them, and granted unto them a chance for repentance. And behold they did harden their hearts against the Lord their God.

I like this verse because it shows the difference in perspective between Mormon, and his people (the Nephites).

Mormon sees the Lord as the one offering a chance to the Nephites.  He is their God, even when they don't realize it.  Mormon cries unto the people to try and help them.  He wants them to repent and stop their madness.  I can tell Mormon's words from the previous chapter (and that i quoted last post about being visited by the Lord) are true because now I see Mormon acting like Christ.

The people on the other hand act like savages (D&C109:65) (Moroni 10:9).  They do not realize it is the Lord that has spared them.  The realization of which would be a great blessing to them.  Their worldview does not include what Mormon's does.  They don't view the Lord as being the overriding influence, they don't view their circumstance as the Lord offering them kindness, mercy and yet another chance.  They see their circumstance as their own.  It's their own military success or lack of.  The battles outcome wasn't due to their superiority, their pride, or their prowess on the battle field, but of course they don't see it that way. In fact they go on to prefer death as opposed to realizing what is actually going on and how involved the Lord is.

The truth is Mormon's view.  The happenings were part of a plan the Lord had, even if they choose not to participate.  The Nephites on the other hand don't view the events in the right light and so they continue with the deteriorating worldview and harden their heart.

The charity of Mormon is inspiring.  He, against all odds, continues to try and reclaim anyone he can even though they are doomed (Mormon 3:12) and the day of grace has passed (Mormon 2:15).  They had the option to repent of course, and avoid the doom, but they insist on doing the opposite over an extended period of time.  As I read the time frames of this chapter this wasn't like a split second thing.  As I'm reading these verses these are repeated decisions over a span of a long time.  There is a message of comfort in this.  Even if your sins have distanced you from God completely, for a long time, the Lord STILL reaches after you.

The scriptures talk about charity, and help us understand it a great deal.  I'm no historian, and I wasn't there, but Mormon here seems to be talking and showing what Charity looks like in action.  He says: "Behold, I had led them, notwithstanding their wickedness I had led them many times to battle, and had loved them, according to the love of God which was in me, with all my heart; and my soul had been poured out in prayer unto my God all the day long for them; nevertheless, it was without faith, because of the hardness of their hearts."  vs 12

God doesn't force, and from what I'm reading God gives opportunities until the recipient clearly, without any doubt, does not want it and has made the refusal clear.  I guess we all get what we want in the end.

Mormon's desires, are in total contrast to his peoples desires. I see Mormon acting in ways that reveal who he has become.  Charity suffereth long, is not puffed up, does not vaunt itself.  Charity never faileth even when the hearts of the intended recipients refuse it, and do fail.  Love still believes, even if the person does not. Love still endures.  God is good.  There is no life that God is not involved in.
Posted by Taylor at 11/22/2011