So where is your Button? (Button Button part 2)

Last post I related how our ward was asked to wear little buttons each week to church that say "I choose" on them.  Read that post if you haven't already.  I thought I'd do a follow up.  The button wearing and promoting continues in the ward.  We were reminded about it from the pulpit last week.

Certain people wear these buttons consistently.  One member of the ward during fast and testimony became emotional about loosing her button.  Many do not wear it, especially the younger couples and families. If you were to guess who wears them, you'd probably be right.  Said people's kids also tend to wear them.  I try not to do foolish things if I can help it, so I have opted not to parade around a button on Sunday's indicating that I follow the leaders, and trust in the Church, and don't entertain alternate viewpoints in blogland, or intellectual historians which may in fact be accurate in the retelling of historical facts.

As new members have come into the ward, they are pulled aside and given buttons, and explained what their purpose is.  The kids usually seem to like it.  Based on the handful of adults I spoke with about the buttons they more put up with it.

The Bishop has on occasion asked why some folks are not wearing the button.  One of the members of the ward who has a calling that takes them to ward council meetings has been asked twice why they do not wear it.  Another ward member upon being asked where there pin was responded "I'm wearing my garments and I have my temple recommend in my pocket and that's enough".   Which I thought put the matter squarely.

I've had a few months to reflect on these buttons, and the meeting where they were given out.  I'm not sure what the motive is to display such things outwardly.  It's a convenient way to quickly assess people, and how "in the boat" they are.  Whatever the secondary effects, the intent per the leaders was to unify the ward.  The intent was good.  What's odd though is we were divided by the leaders into different categories as it related to Lehi's vision depending on how we wore the button.  The object was for us to "choose" to follow the leaders, the church, and not doubt.  And, of course, avoid any of that online stuff. 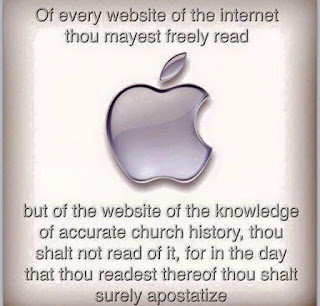 Myself and a handful of other ward members were concerned by all of this.  Relating the button to the lambs blood on the door posts in Exodus was a little off putting to me.  A lamb had to be killed. The blood of the lamb pointing people to the blood of the great and last sacrifice of the Lamb of God, which would cause the destroying angel to pass by.  These are profound and sacred events and lessons.  It strikes me as a bit of malpractice to use them to promote wearing a button to show that you are not going to things like doubt your current church leaders.  The Gospel already has wearable symbols. I'm just not persuaded more outward symbols are what ward members in 2016 lack.  How can an outward symbol possibly bring unity of heart?

The original intent was not doubt good. A desire for unity for the ward is something I want to support.  Wearing a pin in an attempt to discourage doubts and create unity did however seem a little  silly to me.  Wearing a button doesn't solve anyone's doubts. Nor bring their hearts to unity.  How could it?  Knowledge and truth solve doubts.  I care about the truth, and I care about my ward.  I believe unity doesn't come from objects you wear, but from being of one heart, and one mind, and having no poor among you. (Moses 7:18).  None of those ideas were part of the presentation.  Just wearing a button.  Buttons easily create cliques, and club members and club non members inside the ward based on who wears it. Which I admit, could possibly be termed "unity".  I suppose like at a sporting event where you wear your team jersey or team colors. But we all know that isn't unity.  That unity evaporates into anger and hostility faster than spilled drinks in a sports stadium on hot day.

I do want to recognize the honest intent of the local leaders and their right to give the message they saw fit. I do not fault them, and if this has come across as criticism, I apologize.  I fault the contaminated teachings and darkened culture we are so often doused with that Nephi prophesied about in 2 Nephi 28.  We too often do not realize the situation we live in. We think Nephi was talking about some other religion who oddly doesn't even read nor accept Nephi's words.  We have to build unity around Christ, not Church leaders and wearable trinkets if we want to see Zion.

I offered feedback to the local leaders in an equally sincere way as they presented this plan.  I figured if I didn't speak up, and share the impressions I had, what good was I?  I can only hope what I said was understood, but, it wasn't.  This is what I was told in response to my concerns about the buttons:

"Wearing of the button has been a source of strength for personal devotion and unity for numerous ward members, to the point of when they misplace the button they ask for another. Youth, who in simple understanding of the principle being applied also continue to wear them. If there are cliques and separation happening they are formed in the hearts of individuals unwilling to accept the simple request and explanation. As the button says,,, "you choose".

Then they thanked me for the input and for sharing my feelings.  It was clear however that my input was not something they were thankful for.  It earned me a label. A label involving wolves and sheep and it wasn't the sheep.

Even though some ward members thought the program odd enough to be worth speaking up about, to my knowledge no one did.  That too was a little troubling to me.  Sometimes we have a collective lack of courage.  Lack of understanding of the scriptures and the Gospel leads to fear and weakness.  We just follow the leader.  We don't question, we don't think, we, like sheep, just baaa baaa along.  If we're not careful this just allows us to become like passive members of a heard, fearing to leave the safety of the mainstream belief or accepted cultural practice while assured we cannot fail.  Lulled carefully to sleep by false doctrines and foolish trinkets.

To quote the Stake Primary President of our Stake in a sacrament meeting: "We've done a piss poor job of teaching the Gospel..."   She used that phrase in a little different context, but the words fit really well here.  So I'm borrowing them.

When I compare what Joseph Smith started out restoring as part of the restoration, I have to admit it looks very different from what I see now.  There is growing number of awakening members and believers who are seeking Christ, seeking his face, living His doctrine, and seeking a return of the restoration that began with Joseph Smith. They are experiencing the scriptural promised results.  I'm one of them.  Yet meanwhile it seems there is an increase in the darkening consequences Joseph Smith spoke of when people rely too much on the prophet.  Unity can be built around pretty much anything, including following church leaders.  But unity in Christ is something unique.  So is Zion.

Times are changing.  The LDS church is rapidly changing.  But the Doctrine of Christ remains the same. This is where I believe unity should begin.  Could you cite (or list the elements of) aforementioned doctrine if asked?  If we want the unity Christ offers, it seems beyond any argument that we should first understand and then follow the doctrine he taught.  There is a tendency to presume our enlightened version of modern Mormonism has moved well beyond any of that, and all we need to do is follow the current church leaders.  If we don't even know what the doctrine of Christ is, then haven't we gone seeking after some unknown God or idol?  Hoping to find unity on our own terms?
Posted by Taylor at 7/27/2015