Today's Utah Holiday, Pioneer Day, (or Pie and Beer day as some call it) marks the 172 anniversary of the Saints arrival to the Salt Lake Valley under Brigham Young's Leadership. 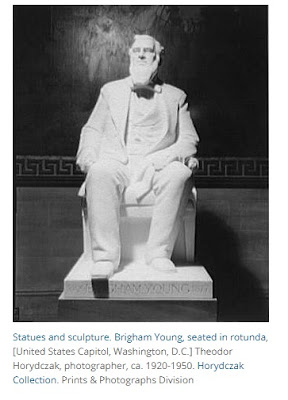 A sculpture of Brigham Young sits at the United Status Capitol in Washington DC in the National Statuary Hall Collection. The State of Utah donated the marble statue.

The Salt Lake Valley I'm told was desolate when they arrived. A desolate desert. There are sources that tell a very different story than the one we're used to hearing.  One account tells of how Brigham Young was sick with Rocky Mountain Fever at the time and the SLC valley was not where they intended to stop, but out of necessity, and due to some water, they stopped there and stayed there.  "This is the Place" tradition has a few historical contradictions.  But regardless the any stopping place after trekking across the plains from Illinois with handcarts and wagons was probably welcomed.  That must have been so awful.

Earlier this month there was a memorial dedicated at This Is the Place Heritage Park in Salt Lake City for 660 pioneer children who died on the trek to Utah.  Having children of my own makes this all the more meaningful, and shocking.

At the dedication of this memorial President M. Russell Ballard, acting president of the church's Quorum of the Twelve Apostles, said the park is for everyone. The pioneers "left their homes and, in some cases, their families in search of a place of refuge, where they could worship Almighty God according to the dictates of their own consciences and build a future without persecution. There was little in the way of provisions and materials that they could carry with them. But each wagon and handcart was filled with faith. Faith in God. Faith that God knew where they were going and faith that he would see them through," President Ballard said.

The story of the Pioneers as exemplified by President Ballard's remarks almost always begins with a portrayal of the pioneers as religious victims who were mistreated, driven out unfairly, without provocation, and the story ends as a triumph over enemies, triumph of faith. Faith that has led the LDS Church to what it is today. It's all (at least in my experience) wrapped up in a scene of pride and victory.  Never is the trek west viewed as a possible consequence of a divine curse foretold in scripture.  I don't know hardly any Utahans who would even tolerate such an idea.

But back to the positive stuff.  There's lots of fireworks, picnics, parades, and various celebrations honoring and remembering those who trekked across the plains. Their courage, bravery, and physical endurance are an important legacy to Utah. And many of those traits are indeed admirable.  All of us can probably get behind such virtues because they are good.


What struck me as curious this Pioneer day is we only hear the story of the Saints departure from and trek to Salt Lake City from one point of view.  No one tends to ask what was happening from anyone else's point of view, including God's.  Anything other than our current traditions is considered a "faithless" perspective even if it's a more true telling of history.  Which is strange.  Sometimes I get the impression that feeling good about history is more important than the history being accurate.  There's no reason to suspect our point of view is not the best and most accurate one, right?  I mean there couldn't possibly be more to the story right?

Other questions never asked today are why the early saints were expelled?  Why Joseph and Hyrum were murdered?  By whom?  Why did the  Nauvoo temple, which so many sacrificed so much to build, have to be abandoned before it was even done and then why was it destroyed soon after?  (By both mob and mother nature)  If anyone does mention anything of this nature, it's firmly from the position of how everyone involved were wholly innocent victims.  Severely persecuted without cause.  So goes the tradition.  History and scripture show this tradition may not be the most accurate picture.  But I'm not here to rain on anyone's parade.

Speaking of parades, I guess today is also a time to build a 95th Birthday float for the current President of the Church, President Nelson.  Mormons certainly are proud of their leaders, no doubt about it.  Behind this float were 95 kids in candle costumes. 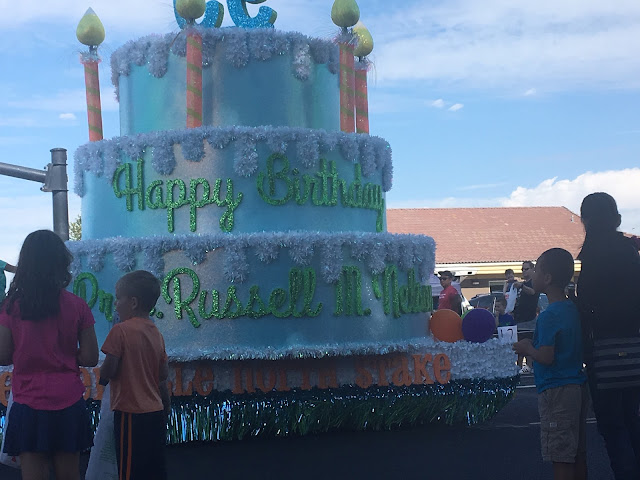 I watched a nice big fireworks display last night at our LDS chapel parking lot.  The entire neighborhood showed up. 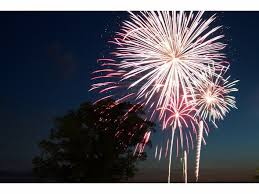 The big flashy lights and boom produced by man delighted everyone there.  Although their duration is brief, they are fun to watch.  Interestingly it's a bit like the bright celebrity-status stars of the day, religious or otherwise, who often get a lot of attention even though they fade relatively fast from the scene, make a lot of noise, and end up wasting a lot of money.

It's interesting that as each firework ends everyone watching finds themselves looking upwards into the dark night sky.  What I love is what's left after the lights from men are gone.  It's the lights from heaven.  I feel like God has often had a message to me in that.  The ever present, ever patient lights in the firmament, put there by God.  Full of meaning but not demanding notice but yet there for those who want to look at them and value them.

This pioneer day for me is a much more sober assessment of the legacy being celebrated by all those around me.  I do value the courage, sacrifice, strength, stamina, and bravery demonstrated, no doubt about that.  But I also see it as a time to assess what repentance looks like in 2019, and what truly merits celebration.  For me it's what comes from God once the temporary lights of man prove to be short lived and expensive.  For me what matters is not temporary booms but the still small but piercing voice of God that speaks again to mankind offering to fulfill promises found in Holy Scripture.
Posted by Taylor at 7/24/2019 No comments:

The LDS Church announced today (July 15th 2019) the location for the Layton Utah Temple. The temple itself was announced over a year ago, and today the location was announced.  Corner of Rosewood Lane and Oak Hills drive.  Both coordinates touch a street named Gentile Street (underlined in yellow). 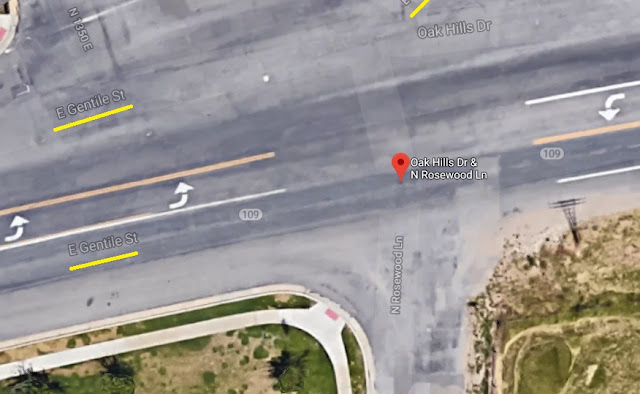 This may be meaningless, but the proximity to Gentile Street did make me laugh a little.  Bigger pic below. 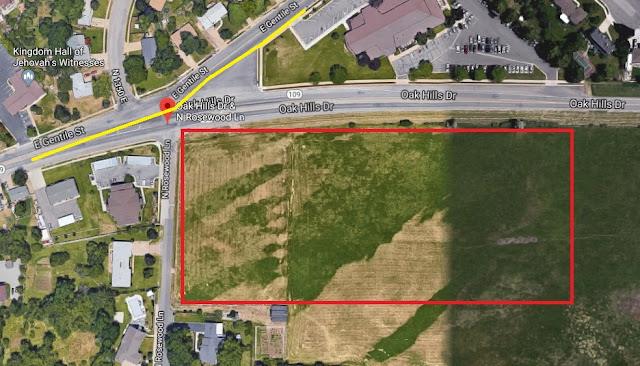 The curious division between light and dark on the google map image ON the property of the temple, visible on the day the location was announced, is coincidental.  Things as seen from above are sometimes really interesting.  This line you'r looking at is a seam line from google maps for who knows what reason, perhaps weather or something caused two images at two different times of day or cloud position to need to be seamed together.  Whatever weather or astronomical coincidences happened, it led to this picture, on this day, for anyone who looks at it.

Dividing light from the dark is curiously something referenced in the LDS temple.  But again just coincidence.  Not sure if this amount of coincidences occur with a lot of temple locations but this one seems to have quite a few.

Zooming out further in the next image.  That dividing line of darkness and light seems to merit some investigation.  If we follow gentile street up in the surrounding proximity, the dividing line cuts through Gentile street, cuts through the temple lot and cuts between the two nearby LDS Chapels located on Gentile Street.  It puts one of the chapels in the dark, (the top red star) and the other chapel, also on gentile street, in the light (bottom red star).  That's kind of interesting.  Again just coincidence of course. 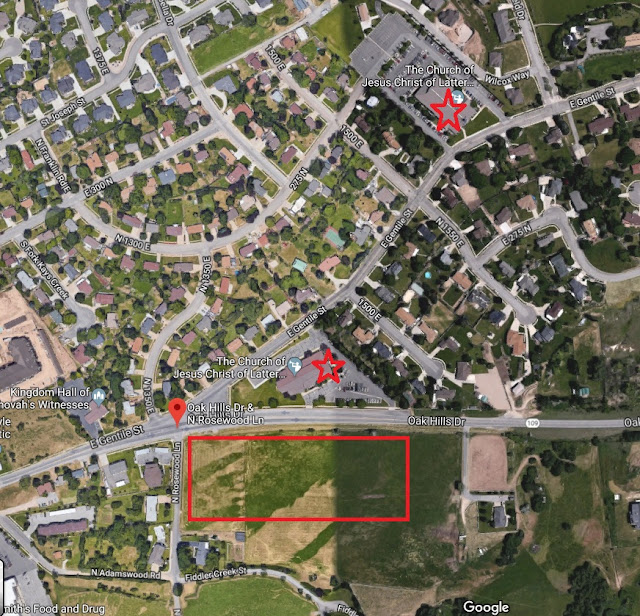 (Side Note: The dark seam line goes from Ogden to Centerville Utah. Around 26 miles.  If you follow the line it's shocking how many LDS structures fall on the line or right to one side or the other.  Sometimes even diverting around a block to include or exclude one.  Link.  But since there are so many LDS structures in Davis County Utah that too is just coincidental)

Would be interesting if there ended up being a coming division where members of the LDS Church will have unique opportunity or unique need to exercise their ongoing agency to choose between light and dark.  Christ taught a parable about the Kingdom of Heaven where fish of all kinds were gathered into a net, and at the end were separated out by the angels.  Christ had another prophecy about some gentiles repenting and some not. Again any connection to all this would be symbolic coincidence.

One of the ideas that causes my fellow LDS Ward members frequent confusion is who the gentiles are that are spoken of in scriptures.  Granted the word is sometimes used more loosely or broadly than other times depending on speaker, there are scriptures directed at our latter day audience that plainly identify the identity of Gentiles.  This is from a temple dedication of all things:


Now these words, O Lord, we have spoken before thee, concerning the revelations and commandments which thou hast given unto us, who are identified with the Gentiles.

For me that identity makes a whole bunch of prophecies and scripture suddenly have ample personal application to our day.  The Gentiles are prophesied to reject the fullness of the Gospel despite being religious, having temples, offering baptisms, and claiming to have authority from God.

The cure is repentance, but the concerning pattern in scripture is that those to whom the message of repentance is offered do not think they need it. They do not think it applies to them.  They don't think there is any such dividing line INSIDE their belief system and practices.  Priestcrafts and lyings and deceits etc.. are only things applicable to others.  So they don't even notice them, and thus have difficulty turning from them.  They see their beautiful buildings, ordinances, authoritative leaders, wealth, and worldly prestige as evidence they are not the ones who need to repent.

They are assured all is well by their leaders.  Anyone who says otherwise is deemed apostate.  When in reality, the apostasy already underway at the organizational level was the issue.  It was just concealed by those who profit from the teaching that another apostasy can't or won't happen.

But the mercy of God shows His open arms:  Continuing from 3 Nephi above

But if the Gentiles will repent and return unto me, saith the Father, behold they shall be numbered among my people, O house of Israel.

Makes me want to repent.  God is fair, so he always warns people.  I feel warned, I hope others do too.