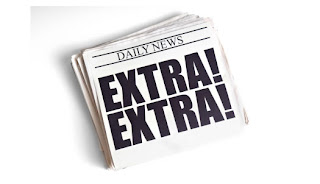 You know how the church has a weekly broadcast of "Music and the Spoken Word"?  The Church had recently decided on an additional broadcast on a yet to be determined time/day. This broadcast will be "Scripture Study, and the Written Word"

It will be a broadcast by a member of the quorum of the twelve apostles, or general authority from a quorum of the 70 who will do a scripture study for any who would like to tune in.  The foundational scripture will be The Book of Mormon.  There will be no program outline, or agenda of how many verses to cover.  Participants are encouraged to bring, and use their scriptures.

The broadcast will be a pure study of the scriptures.  The speaker will primarily use the written word as the teacher to expound and teach the doctrine of the Restoration.  The source material will be primarily a chosen scripture from the Book of Mormon.  However, all are invited to bring their sets of scriptures with all the standard works for cross reference and additional connections.  Participants will get a feel for the way in which scriptures were written, the Spirit of them, and learn to read the writings in new and enjoyable ways in their personal study.  Participants are invited to take the ideas presented and explore them in their own study.

Since the book of Mormon is so vital to the restoration of the Church, it's been decided that the church as a whole would benefit from a weekly study of the written word of God.  Joseph Smith said: "I told the brethren, [the twelve Apostles] that the Book of Mormon was the most correct book of any on earth, and the keystone of our religion, and a man would get nearer to God by abiding by its precepts, than by any other book." JSHC 7 Vol., 4:461.

D&C 84 contains word from the Lord about the church being under condemnation for neglecting and not using the Book of Mormon.  This new broadcast is intended to encourage us towards higher ground and to prompt the members to study the Book of Mormon and work towards removing the condemnation.

--End of my paraphrased news article.

I for one look forward to such a broadcast!

Ok, now for the actual facts.  That news above was just a teaser.  That broadcast isn't actually going to happen.  At least not to my knowledge since I thought it up just now as I wrote this.  But how awesome would it be? I would tune in, would you?  Just an idea.

In other news, you can put your profile up on one of the church's websites and it will read "Hi I'm _______ and I'm a Mormon".  You can put your testimony on there and help others know that Mormons are normal everyday folks.
Posted by Taylor at 11/15/2011