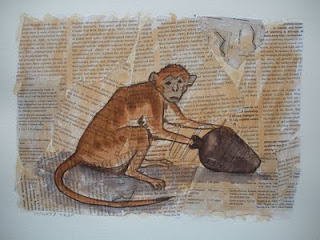 I've been thinking recently about Christs teaching to "Cast your burden aside". Also pondering about the part where he teaches that his yoke is easy and his burden is light. What it is about burdens that make them need to be cast aside.

Burdens weigh us down, and often actually prevent us from moving forward, or upward as in the spiritual reach towards God. I always laugh when I hear about the "monkey trap". It's a coconut that has a small circle cut into it and then hallowed out. Then the person will put something enticing to a monkey inside and so when the monkey puts his hand through the hole in the coconut (or side of a tree or whatever) and grabs the object he wants, now his hand is too big to get it back out of the hole. Then the person can walk right up to the monkey and capture him. The monkey clinging to the object has a fist which will not fit through the narrow opening. If the monkey would let go, the hand would easily come and and the monkey could escape.

Made me think about the burdens we cling to. About the things we need to unburden ourselves from in order to get unstuck or move forward. It's easy to cling to hurt, to anger, to disappointment, to pride, to jealousy, to pain, to suffering. What a relief it would be to not hold on to these things. There have been times I wasn't aware I was hanging onto such things, but in reality I was. It took some persuasion but when I saw the truth, I actually was the one holding on to things that I at some level attributed to some other force or source outside of myself.  Once they were let go of, suddenly I felt movement forward.  Similar to the monkey who cannot escape the trap unless he lets go of what he clings to.

I think the truth can be very very liberating. Casting our burdens aside as opposed to in front if us will help ensure we don't stumble on them again.  When we cast them aside and take upon us Christ's yoke and learn of Him, Christ tell us we will find rest. But it's in the doing. The Gospel makes sense more in the doing. You have to actually let go of the burden, and all the secondary pay offs you may be getting by holding on to bitterness, resentment, and anger.  I can write it but doing it has provided more than any amount of words could convey. It's the "doing" (at least my poor attempts) that are usually what lead to what I write about.
Posted by Taylor at 5/16/2011