Ether 12. Hope, Surety, and an anchor 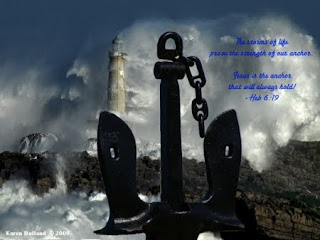 4 Wherefore, whoso believeth in God might with asurety bhope for a better world, yea, even a place at the right hand of God, which chope cometh of dfaith, maketh an eanchor to the souls of men, which would make them sure and steadfast, always abounding in fgood works, being led to gglorify God.

So many things in life are unsure, it's the nature of our world. Entropy is part of life. Yet here is a prophet of God, telling us there is something available that is very sure. Something eternally sure. How inspiring. It uses the word steadfast; meaning firm, not blown about by what people say or do, winds of doctrine, or the opinions of men. As I read this verse it becomes one of my favorites.

He says "whoso believeth in God MIGHT with surety hope for a better world". Why might? I think "might" because we have a choice. God offers, but we are allowed to choose to accept or just go along with mainstream. We can do what everyone else does, believe what they believe, do what your told, and sit smug in our beliefs that all is well. Or there is hope available, something real and connected directly to God. Hope that is far beyond mere wishful thinking, hope that is beyond a positive expectation. The hope he is talking about is an actual substance that is sure. It's the waiting period between the time of a promise from God (which is sure) and the final fulfillment of it. It's the waiting period, but the outcome is assured. (Eighteen Verses Chapt 4). Such hope the scripture say is an anchor. What a beautiful image of something strong holding a ship in place amidst waves, currents, or storms. An anchor goes deep, rests on the bottom. Implying the hope a person has is deep, it's restful, it goes to the core of a persons soul and provides stability, it's sure and steadfast just like the verse says. This is all ended with the word "would". It "would" make people such things as the verse says, were people to obtain it.

So what is a hope that causes people to abound in good works? That is some good hope. And not just a few good works either, but abounding. Interesting. It doesn't say that I'll do good works because I'm trying to be a good person. It doesn't support the belief that "if I'm just good enough for long enough I'll get there". It says the good works abound because of the hope within the person. To me this suggests the good works are the fruit of the inner life that is being altered and anchored. It's not forced or done to earn something. This hope "comes of faith" the verse says. But the first of the verse says this all begins with belief. Belief in God. It progresses, faith grows, hope and knowledge follow.

Then the verse ends with more interesting news "being lead to glorify God". Yes! How awesome. All these good works, hope, faith, leads a person to glorify God. In other words the persons natural response is anything but pride, selfishness, self gratification, and prideful ambition, it's humble, it's beautiful, it seeks to glorify God. There are few other appropriate response for certain events than to bow, worship, and glorify God. (Alma 36: 22) (Rev. 1: 17) (1 Ne. 1: 14) How comforting that this verse's content is leading us to such a place. A place where one glorifies the being who is Light itself.

In this world of uncertainty there is an anchor. There is love and hope in Christ, enduring as the returning waves of the sea. Gods longsuffering and outstretched merciful arm is extended. We choose what we do with it, and how we respond.

We should respond with repentance, seeking all truth, and obtain like this verse suggests an anchor to our soul. :)
Posted by Taylor at 8/14/2010