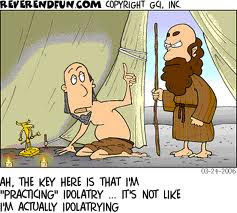 1 Now it came to pass that after the end of Korihor, Alma having received tidings that the Zoramites were perverting the ways of the Lord, and that Zoram, who was their leader, was leading the hearts of the people to abow down to dumb bidols, his heart again began to csicken because of the iniquity of the people.

Dumb idols.... that phrase sometimes strikes me as funny. In the scripture above it was because of their leader. One comment in Sunday school last Sunday was "Historically if the King was wicked, worshiped idols, the people tended to, if the King was righteous, the people tended to be too".  I thought the commentw as worth sharing.  Pays to always know when the Holy Spirit confirms a leaders words, or if they are just words of a person. Assuming is not an acceptable alternative.  "It was asked of the Prophet Joseph Smith and answered by him. He writes in his journal, "This morning . . . I visited with a brother and sister from Michigan, who thought that ‘a prophet is always a prophet'; but I told them that a prophet is a prophet only when he was acting as such" (Joseph Smith, _History of the Church_, 5:265).

But back to the dumb idols. This phrase shows up a few times in scriptures. Last week in Sunday School we read some scriptures from Second Chronicles that show again and again and again that people fall for idols frequently.  It's one of the most common scriptural errors and consequently warnings.  Idolatry of these people in the scripture quoted was enough to make Alma sick.

"There is the famous story of the Eloquent Peasant from the Middle Kingdom in Egypt that tells how the rascally manager of an estate, when he saw a peasant passing by on his way to the market with a load of goods, cried out, “Would that I had some idol that would permit me to rob this man’s goods.” A dumb image would offer no opposition to any course he chose to take. That was the beauty of idols: they are as impersonal and amoral as money in the bank—the present-day as well as the ancient equivalent of a useful idol."  Get it?  An idol will not correct you.  But it will appear to get you off the hook while allowing you to appearing religious.  It will lead you astray all the while claiming such things aren't possible.

Idolatry in the Hebrew Bible typically gets defined as either:
Do we have idols?  We latter day saints don't sit and reverently stare at statues do we? Or honor images of historical men/women of God do we?  Scriptural speaking the Lords people find themselves falling for idols all too often.

Do we sometimes idolize leaders?
Is it ok to treat the Lords servants as almost celebrities? Do they ask us to to do this? (no)
Do we sing: "Praise to the man"?
Do we build statues to honor dead servants of God? Do any scriptures support this?
Do we put gold leaf around a fiberglass statue of a man and put it on top of hundreds of buildings?
Do we love sports teams in excess?
What of the show "American Idol"?
Do academic achievements and degrees become objects of such desire and ambition they become a false God?

To quote one of my friends when I asked if he thought Moroni liked being on top of the temples: "he's probably as embarrassed as hell being up there" haha.  Sometimes we miss things because they are so intertwined into our culture.  You almost have to go somewhere otherworldly and then come back in order to notice how we too may have fallen for idols.

"Lord, if thou will, thou canst do all things. Thou canst show me things I had never before considered, Lord may I humbly trade any error I may possess for the light of truth, for thy eternal righteousness." Amen
Posted by Taylor at 8/09/2010