Sisters Administering to the Sick 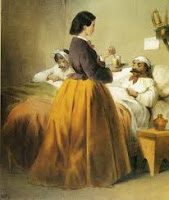 It's funny when I read something that Joseph Smith taught that if done now days may land you a probing interview, or even a disciplinary council.  Or perhaps more uncomfortable: labeled as a weirdo among your fellow ward members.

"Respecting females administering for the healing of the sick, he further remarked, there could be no evil in it, if God gave His sanction by healing; that there could be no more sin in any female laying hands on and praying for the sick, than in wetting the face with water; it is no sin for anybody to administer that has faith, or if the sick have faith to be healed by their administration."

"President Smith then gave instruction respecting the propriety of females administering to the sick by the prayer of faith, the laying on of hands, or the anointing with oil; and said it was according to revelation that the sick should be nursed with herbs and mild food, and not by the hand of an enemy.  Who are better qualified to administer than our faithful and zealous sisters, whose hearts are full of faith, tenderness, sympathy and compassion.  No one."

The sisters laying their hands on the sick?  With oil?  That's sure interesting.  Guess we've gotten so good at medicine that we don't need this any more?

Along the topic of sickness and finding healing.  Joseph differentiates between faith, and trust in the arm of the flesh.  How much application this has to modern day is up to you to decide.  But the quote is here for you to think about. It's on p190.

"Sunday Sept 5 1841.  I preached to a large congregation at the stand, on the science and practice of medicine, desiring to persuade the Saints to trust in God when sick, and not in an arm of flesh, and live by faith and not by medicine, or poison; and when they were sick, and had called for the Elders to pray for them, and they were not healed, to use herbs and mild food."
Posted by Taylor at 12/27/2011