Had a good laugh this morning on the way to work as I saw the University of Utah's new billboard advertising their professional MBA program.

This was the picture:

There is no where for a fish to go, if fish could fly this picture would make sense.  I had to chuckle..... by "Rising to the next level" this fish's life will likely not last longer than a minute or so.  I also chuckled that they used a goldfish.  The fish everyone knows costs hardly anything, maybe a dollar or two for the bigger ones.  They are also often used as a feeder for larger fish.

So according to this add..... the Professional MBA is depicted by a gold fish rising to the next level into the unknown air, which again would be great if fish didn't need water.

I think they meant to use an image more like this: 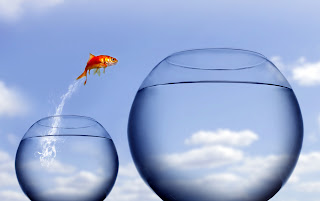 There are many billboards about "rising" around town.  BYU has one as well.  Everyone wants to "rise", all these billboards are using this catch phrase "rise".  Not to be confused with "arise".

I found this following quote from a friend David especially interesting:

"While using the word “rise” in marketing slogans today might seems clever and positive, the word RISE in scripture usually always has a negative connotation. Definitions of the word “rise” include “to revolt" and "to puff up or become larger… to swell up, expand.” Rise is also word used when speaking about making bread, as it was the yeast—or leaven—that would cause the bread to “rise”.  Yeast was synonymous with sin… since it has the same effects that sin (pride, wealth, and power) has, to cause us to be “puffed up".

Wilford Woodruff wrote the people in those days, like Israel of old, associated certain worldly successes with their ideas of right, and misfortunes with their ideas of wrong. That of course would make them morally obligated to get rich.  Since we 'can buy anything in this world with money,' it is the tool that Satan created and uses. The word “money” itself comes from the Latin word “moneta” which means “warning”, as well as from the French word monēre which means caution, or warning."
Posted by Taylor at 12/10/2011