Each April and October at our much anticipated semi-annual Church General Conference, the Saturday afternoon session opens with a statistical update consisting of a “financial report” and a “membership report” delivered by two church officials (who we sometimes like to pretend are independent auditors as opposed to church employees).  In any event, these statistics are delivered to the audience who's breath is somewhat being held anticipating the new growth numbers.  The media likes to report on this too.


One view is that this is great news, its very reassuring that so many are accepting the Book of Mormon and getting baptized.  It's faith promoting that the Church is growing and having success.  It may also give people additional assurance that they are part of something that must be true, or it wouldn't be growing as it does.  For many it inspires.  We want to believe things today are better than they were yesterday, and that they will continue to get better tomorrow.  And so that is what we get. All is well in Zion we tell ourselves.

But here is something else to consider.  I don't pretend to have every answer, or know every detail.  But this may be interesting.

How many members the Church has compared to how many active members it has is a much more deflating statistic.  We are not going to get those numbers any time soon at General Conference.  That metric wouldn't feed our vanity.  In this other view, our vanity could be fed by hearing only certain statistics while neglecting others.

So how does the Church measure all these statistics?  What is considered "active"?  And what is the ratio between Member vs Active Member?

"Church membership growth numbers are often interpreted inaccurately, which can lead to misconceptions in the media. Therefore, it is important to clearly understand what these numbers signify. They represent the number of Church members, but they do not represent activity rates. The Church does not remove an individual's name from its membership rolls based on inactivity."

Lowell Benion and Young noted: "Although Mormons reject infant baptism, they count as members any 'children of record' blessed and named soon after birth. Thus unbaptized children of members (until age eight) make up an important share of the LDS population (about 15 percent among Americans)." (The Uncertain Dynamics of LDS Expansion)

Although the LDS faith is commonly regarded as a high-requirement faith, its definition of membership is closer to that of the Catholic Church. Didn't see that coming did you?

Again from President Newsroom:  "Over 12 Million Worldwide United in a Single Purpose," (LDS.org press release, April 1, 2005). Can 12 million worldwide unite if even if we have no idea how many of them are even active? Or  even old enough to understand the word unite?  Is the number (12 million in this case) being used to present an image to people?  It must, because as we have seen the 12 million makes no distinction between active vs inactive members.  But President Newsroom implies that all 12 million are apparently united, holding hands almost.  But don't fret, for all of the less active, inactive, lapsed, or disaffected Mormons out there, you are still being counted! You still make a (statistical) difference. 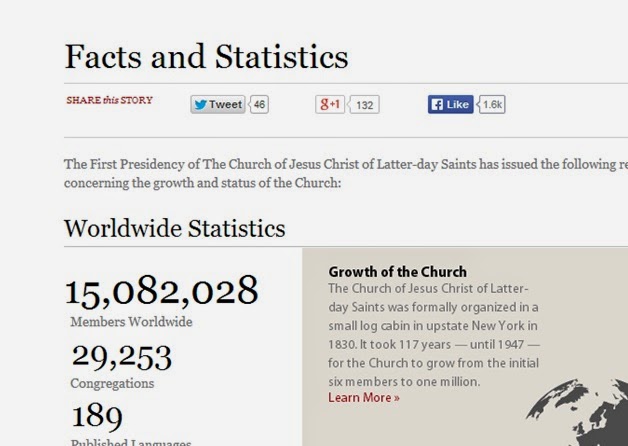 So what constitutes "active"?  That word means different things to different people.  There are enough leaks from downtown and enough claims about this that we can see the patterns.  Many reliable sources say the church defines "activity" based on attending Sacrament meeting at least once per quarter.  Other sources say it's having attended sacrament meeting once per month.  I've personally heard some of each.  Apparently we can't decide if quarterly attendance is too far of a stretch to base our numbers on.  Anyway, so ask you self what day of the year do most people attend Church?  If you had to choose, what day would it be?  If your like most of the Christian world, you would probably guess Easter.  Christmas would be another big hitter.  So if all you do is go on Easter and Christmas your almost active by the quarterly standard.  I wasn't kidding when I brought up the similarity to the Catholic church a minute ago.

Here is an interesting comment found in the Salt Lake Tribune from May 2012.
"We estimate that only 40 percent of LDS Church members in the U.S. attend church regularly," said Matt Martinich, an independent researcher who studies Mormon demographics for cumorah.com. "That number varies by region — some areas have very high attendance like 70 percent and some as low as 20 percent."

I wonder what the objective is when an organization decides to do things like the following:  count people as members regardless of how long it has been since any sort of activity, keeps lost members on the records until they are 110 years old, considers unbaptized children as members, and counts people as members even though those individuals do not self identify as members.  Some reports say that members who have resigned their membership still find their way as part of the membership statistics.  So why fluff numbers?  Who cares?  Fuzzy math doesn't make the church untrue does it?

What profit is there to number fluffing?   There is indeed a "pay off".  For one its to look good.  To project a strong positive image. The advertising and massive marketing strategies by the LDS church confirm just how important it is for the church to fit in and be acceptable to the world. That the LDS Church chooses to advertise total baptized members, rather than total active members, indicates something.  What that is, is up to you.

How do other churches and religions report their membership numbers? Well, a lot of them don’t. But then again, most religions and churches are not nearly as centralized (read: correlated) as the LDS Church.


So why inflate numbers?  Is it possible its pure vanity?  That's one view.  Would it be so far of a stretch to call these membership numbers vanity metrics?  I don't think so.  If so we should not be mislead by them.  I seriously wonder if this truth is more helpful:  As Jesus put it.  "few there be that find it".  That scripture, from one view has been turned into: "don't worry, all is well, more and more are finding their way into the membership statistics than ever".

Jesus's statement makes me sober, makes me want to repent, and instills a need to call upon God.  It does not assure me "all is well" or feed vanity.  For me it usually has the opposite effect of the membership report.
Posted by Taylor at 6/30/2014