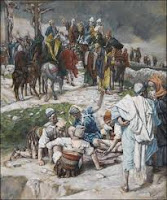 The practice of casting lots is mentioned 70 times in the Old Testament and seven times in the New Testament.  It's also mentioned in the Book of Mormon and Doctrine and Covenants.  What caught my attention was the mention of it at Church today.

One meaning of the word "lot" is "an object used in deciding a matter by chance, a number of these being in a container and then drawn out or cast out at random one by one" (Webster). The object used by the Jews on the Day of Atonement called a "lot" was "a little stone" (goral, Leviticus 16:8, Gesenius, 179), one to designate a goat as a "sin-offering," and one to designate another goat as a "scape-goat" ("Azazel," Leviticus 16:8-22). Also, lots were cast to designate land inheritances for the tribes of Israel (Joshua 14:2).

The four soldiers who crucified Jesus "cast lots" for one of his garments ("without seam, woven from the top"), as David predicted a thousand years in advance (Psalm 22:18; John 19:23-24).  God's will was not always sought in connection to lot casting, sometimes it was used to promote fairness in a decision. Aside from people using lot casting for a variety of purposes, we know it was utilized by some, with Gods approval in deciding important matters.

It seems to have been held that the parties involved would offer prayer and then allow the casting of lots to show the will of God.  The practice would allow everyone present and even those not present to physically witness the outcome has having no bias and be accepted as revealing God's will.  All could physically see that there was no human intervention to sway the results one way or another.  Its used in scripture a few times as having determined God's will.

Something about this practice intrigues me.  We still have forms of it in our day.  Some of it I guess is called Sortition.  We draw straws, and flip coins, we pull names out of a hat, and numbers out of bins.  It can remove a lot of human influence from a decision being made.  But as a means of determining divine will, it's not very common.  Some say since the day of Pentecost, with the Holy Spirit now available, such methods of determining Gods will are no longer necessary, or needed.  But I see examples in the D&C of this practice.
The scriptural example of this that was mentioned today was in Acts 1.  The apostles are going about filling Judas's place in the quorum.  They cast lots, and the lot falls on Matthius.  (Acts 1-24-26).  Some in church today thought this was a "vote".  But historically the practice wasn't a vote, but it was something I thought deserved some thought.

What an interesting way to determine God's will.  I also remember Nephi's use of casting lots to decide who would go try and get the brass plates from Laban.

Just thought this was interesting, I"ll probably add more to this in a bit.
Posted by Taylor at 7/31/2011