Come unto Christ, not just Come unto Church (Elder Scott and Elder Nelson)

Came across some clear and direct teachings from Elder Richard Scott, and Elder Nelson from a priesthood meeting at the Layton Northridge Stake back in 1992.  The words rang so true, and were so relevant to our day I wanted to post them so they would be more available.  It's not really new, just a timely message i guess. I liked that the setting was more personal, and Elder Scott and Nelson were able to teach and discuss with the people present, as opposed to just reading a talk like they have to do at General Conference.  I love when the leaders are able to meet with and teach in smaller settings where it's not just them speaking to an audience but rather with them.


Elder Scott talked about "Coming to Ch" and how there is a problem in the church of teaching each other to come unto Church when we should have been teaching to "Come unto Christ".  He taught the real purpose of the Church is to bring people to Christ.  To lead and teach others how to establish a direct link to Christ and to live the fullness of the Gospel. He explained how we establish that direct link to Christ is by direct communication with Him through personal Revelation, the rock upon which our own personal salvation is built. He talked about the role of the priesthood leader is not to put yourself between Christ and his children, but instead to work alongside but from higher ground while not putting themselves in between so as to block the path (see pic below).  He also explained to not put the church in the place of Christ. 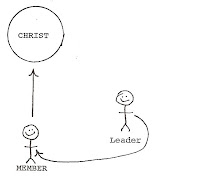 He asked those present where they thought most of the church would be on a the following diagram below.

After some responses this was the conclusion and the resulting drawing.

Elder Nelson talked about the many many problems facing priesthood leaders.  Financial difficulties, divorce, abuse, pornography, teen pregnancy, immorality, dishonesty...etc.   He said all of these problems are not problems, but are symptoms of one problem:  "Lack of conversation to Christ".  He said if everyone were to come to Christ how these symptoms would disappear in their lives and bishops and priesthood leaders would not have to deal with so many of those supposed problems. He said that if the Priesthood leaders would go into the homes of the members and teach them how to come unto Christ that all of these problems would disappear for all those who would come unto Christ. Or at least they would be greatly minimized, as people would either become Self reliant through their relationship with Christ and those symptoms would not be so real or obvious in their lives.

Elder Nelson pointed out that our natural solution to these symptoms is to run people through programs and meetings and to organize more and more meetings to discuss the problems of the people. He said the real solution is to get out of the meetings and go help the people achieve personal conversion to Christ, and to understand the principles of Faith and the Pure Love of Christ.

Simple yet profound truths.  Hope you have enjoyed them as much as I have.
Posted by Taylor at 8/09/2011