The Tale of the Three Brothers 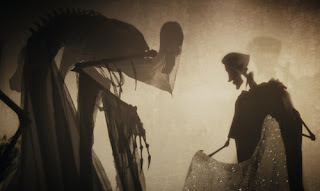 I loved this story from Harry Potter.  The lessons go deep.  After you read it, or remember it ask yourself what would you ask for?  Whats our motive for asking?  But most of all, how does what we ask for show or reveal our inner character?  This is a fun little story that I thought good enough to put on the blog.   If you want to watch the animation click here.  Or I've written it out below.

More thoughts after the tale:

“There were once three brothers who were traveling along a lonely, winding road at twilight. In time, the brothers reached a river too deep to wade through and too dangerous to swim across. However, these brothers were learned in the magical arts, and so they simply waved their wands and made a bridge appear across the treacherous water.

Before they could cross however, they found their path blocked by a hooded figure. It was death, and he felt cheated.  Cheated because travelers would normally drowned in the river.   But Death was cunning. He pretended to congratulate the three brothers on their magic, and said that each had earned a prize for having been clever enough to evade him.

So the oldest brother, asked for a wand more powerful than any in existence: So Death fashioned him one from an Elder Tree that stood nearby.

The second brother, decided he wanted to humiliate Death even further, and so he asked for the power to  recall loved ones from the grave.  So Death picked up a stone (known as the resurrection stone) from the river and offered it to him.

Finally Death turned to the third brother. A humble man, who did not trust Death.  He asked for something that would allow him to go forth from that place without being followed by Death.  And so it was that death reluctantly handed over his own Cloak of Invisibility.

The first brother traveled to a distant village, and with Elder wand in hand, he killed a wizard with whom he had once quarreled.  Drunk with the power that the Elder wand had given him, he bragged of his invisibility.  But that night another wizard stole the wand and slit the brother's throat for good measure. And so death took the first brother for his own.

The second brother journeyed to his own home, where he lived alone. Here he took out the stone that had the power to recall the dead, and turned it thrice in his hand. To his amazement and delight, the figure of the girl he once hoped to marry, before her untimely death, appeared before him.
Yet she was sad and cold, separated from him as by a veil. Though she had returned from the grave, she did not truly belong in the mortal world.  Driven mad with hopeless longing, he killed himself so as to truly join her. And so Death took the second brother.

As for the third brother, Death searched for many years but was never able to find him.  Only when he had attained a great age did the youngest brother shed the Cloak of Invisibility, and give it to his son. He then greeted Death as an old friend, and went with him gladly, departing this life as equals."

I'm reminded of something actually within the Gospel, that is curiously related.  Instead of a winding road at twilight, it's a straight and narrow path leading to more light (2Nephi 9:41).  Along this path one grows in light and is lead to an encounter with the being who is Light (D&C 93:1).  The three brothers use magic to create a "bridge" to the other side.  In the Gospel, it's the atonement that bridges the gap between our state and that of God. There was no magic, it was carefully planned and an eternal price was paid on our behalf.

Instead of encountering death, at some point along the Gospel path one encounters He who has overcome Death (John 11:25-26).  A request is granted and the person can ask what they will (3Nephi 28:1) (Enos 1:15). Instead of being learned in the magic arts, the disciple is learned in the mysteries, character, and truths of God (3Nephi 28:25-26).  Instead of departing this life as one owned by death, one departs as one of Christ's, firm in the hope of a Glorious Resurrection. Instead of temporary earthly mystical powers, one gains eternal life, with treasure in heaven (Matthew 6:19-22).  If you know what to look for, this path and people walking it are everywhere in scripture.  But you'll miss it if you don't know what your looking at.

The Gospel is so intriguing.  The treasures, wisdom and fascinating elements go on and on.  But we're supposed to leave the mysteries alone right?  We're not supposed to really get into that sort of thing are we?  So I guess we'd better turn Harry Potter back on, lull ourselves into security, and rest assured that if we just go along, follow leaders, stay mainstream, we won't ever be lead astray.  So back to wizardry and magic.
Posted by Taylor at 7/26/2011