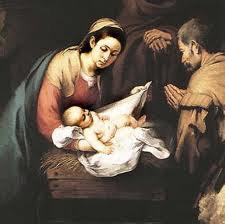 This post goes with the previous post on the inner wardrobe, they go together so read both.

"Swaddling. A very old and common practice among Near Eastern people was the swaddling of newborn babies. In many areas of the Near East this custom still prevails today, and is becoming popular again, and is recommended by modern pediatricians. According to this custom, mothers first bath their newborn infants, and then very gently rub a very small amount of salt which has been finely pulverized in a stone mortar for this great occasion. They also sprinkle their babies with a powder made of dried myrtle leaves. Eastern parents believe that putting salt on a babies body will make his or her flesh firm. This little ceremony also represented a symbolic testimony that the parents would raise the child to be true and faithful.

The swaddle is a square yard of cloth to which a parent attaches a long narrow band at one corner. Usually the mother wraps the infant in the swaddle with it's arms close to it's body and it's legs stretched out. Then she winds the narrow band around the body from shoulders to ankles. The infant looks like a tiny Egyptian mummy. People would swaddle their babies several times a day for at least 6 months believing that this would help their little bodies grow straight and firm. Again this is also a sign that the parents will teach the child to become honest straightforward and free from crookedness. In certain areas of the Near East to make a remark that a person may not have been salted at his birth is to arouse a great deal of trouble. Remember salt symbolically represents faithfulness, not to be salted or swaddles implies that the child was unwanted and its father unrecognized. We can see that this custom is very important and symbolically significant.

It would be only natural that Mary, the mother of Jesus, would salt and swaddle her newborn infant. Jesus was to be true to God and His word. His swaddling represented loyalty and faithfulness to his heavenly father as well as to his parents. Swaddling bands were frequently embroidered with symbols indicating family history and genealogy. According to ancient and modern custom, to be acceptable, the embroidery must be exactly the same on both sides; this was a type showing that the outer life and the inner life were the same, that they were never to have a wrong side to their character. "