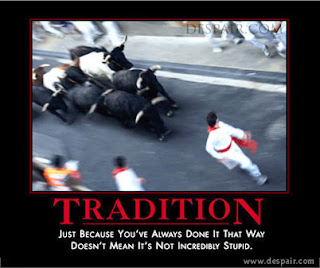 Traditions can be very un-spiritual things.  May members of the Church I know are members simply due to tradition.  Had they been raised in another religion, and spent the same amount of time there, they would likely be a strong member of that faith instead.  Conversion based on tradition is nothing like conversion based on conviction and and a burning testimony through the Holy Ghost.

In the context of scripture traditions are worth paying attention to.  They are mentioned often enough that they have a lot of relevance to each of us.  Some traditions mentioned in the scriptures are very good, (Alma 3: 11, Alma 9: 8, Enos 1: 14) some neither good nor bad, and others are so bad they impede peoples salvation and cause many an error (D&C 93: 39).

The above scriptures show the two contrasting religious traditions. From the book of Alma quoted above some traditions were good and helped preserve truth, but then there were the folks who bad mouthed those correct and true traditions and preached a different set of beliefs.  New traditions grew from those as well.  A large part of many missionaries experiences in the scriptures is convincing others of their incorrect traditions (Alma 37: 9). The book of Mormon is full of this kind of thing. Many people in Christ's day did not recognize him nor follow him specifically because their traditions blinded them. (Mark 7: 8, Col. 2: 8)

The good and the bad traditions always involve Christ. Either He has or is being removed and the tradition is a stumbling block or a replacement, or the tradition is directly related to coming to Christ and receiving the truth. Often people with incorrect traditions had to actually be convinced of their errors before they recognized it. (Alma 21: 17).

Tradition can replace spiritual things. For example belonging to a church out of tradition is not the same as being a convert to the truth through the Spirit. Doing something because you've always been told it was true and you've always done it, or believed it, can also be totally hollow and incorrect. A tradition to do pretty much anything becomes incorrect when a habitual set of actions, thoughts, or behavior replaces or does not lead to the truth, and does not remember what the underlying truth was. It becomes a mere habit, and fails to produce light and truth.  King Benjamin is a great example of teaching your children from scripture, not tradition (Mosiah 1:2-5).  How often do we do that?  Do we teach our traditions or scripture?

There is one tradition that very much appeals to me. It's a tradition dating back who knows how long. That of wise men, usually elderly in a community passing down the "secrets" or mysteries of life they have learned. The tradition of sharing truth through stories, or legends. The handing down of truth, or saving principles through ritual or parables or stories (W of M 1: 10-11 , 4 Ne. 1: 48). The tradition of seeking God through scripture study, pondering and prayer. I find all of these in the scriptures. These traditions preserve light, the other kind replaces light with hollowness that has a form of truth but lacks power and substance. The scriptures are where that stuff is found.

Seeing as the book of Mormon talks so much of tradition I think it would be wise to be especially aware of our own traditions that may not be correct.  We have many traditions in the LDS culture.  Some we cling to with great pride, and they actually increase our pride.  However again, if we take the book of Mormon as our guide we should be constantly checking or traditions to see if they are true and light filled, or if they actually distract us and prevent us from light and truth.  Sometimes we even create cultural doctrine based on our traditions.
Posted by Taylor at 10/11/2010