Going forward, by going back. 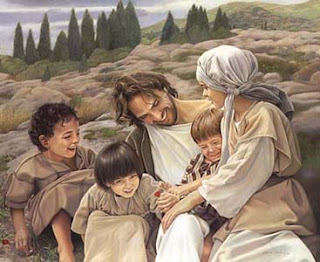 All of us if we tried could probably remember a time in childhood when things were more simple, not overly complex, not burdened by the upsets of life, or all the education and philosophies, not to mention endless worries that come from being an adult. We took each moment as it came. The developmental years of life set the foundation for a persons entire personality. At one point in Luke 9 Christ's apostles were reasoning among themselves who would be the greatest. In the Matthew account Matt. 18: 1-4 he's asked about who would "be the greatest in the Kingdom of God", and it says he called a little child to him, teaching to be converted and become as the little child and that such is greatest in the kingdom of God. Isn't that interesting to think about. His apostles weren't the greatest as they probably were hoping to hear. Instead Christ calls to a child.

I don't think he meant be childish, but instead the answer to the question taught that greatness came from attributes a child has, specifically humility. Going backwards, to that state was how to go forward. Back to being as a child, to the days of innocence, meekness, humility, having that open willingness and receptivity that a small child has.  Children can imagine things.  To a child mother nature is fascinating. Letting go of all that accumulation of adult baggage that happens to everyone growing up. What a useful teaching. Imagine (like when you were little and were good at imagining) what a person could learn, (or unlearn as may be needed) by this teaching.

One eastern teaching that I love relates to this, I found it in the Tao of Kung Fu. The beginner martial artist becomes an expert through dedication, practice and training, then however to move on he returns to the beginning, as a beginner, to now see see's things as they are, as if for the first time.
Posted by Taylor at 10/05/2010