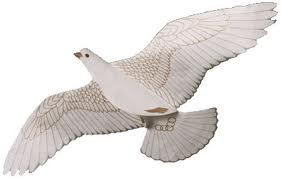 Lepers as I understand it in the society in which Christ lived were required to live away from the city and regular dwelling places of the people. They were banished so to speak. But there was a Law of Moses ordinance for those healed from the disease that was available to them. Thus according to the law they could be clean and be allowed to come back and be a part of the community. (Leviticus 14) The ordinance included many things, one portion was one of two birds was killed but the other was released out into the open to be free.

I imagine that the one leper who went back to Christ and worshiped went and participated in the law of Moses ordinance.  This would fulfill the normal cultural expectations, and fulfill the religious and legal duties that were upon him.  Although unnecessary from one point of view, it would still have been the correct thing to do.  He who gave the law had pronounced him clean, but to be re-accepted into the society they probably would have wanted him to participate in the ordinance.  As a matter of correct procedure so to speak.

More importantly imagine the thoughts and feelings this one leper would have had while participating in the ordinance.  Doing so with a changed heart, with deeper insight. Imagine how much of an act of worship that would have been for him. Those who have faith in Christ tend to have lives that are a type of Him, they fit a pattern. Christ was baptized, He went through the ordinance like everyone has to, He submitted to the ordinance even as the Son of God. This one Leper, having recognized the Master and Priest I would imagine would have followed in the pattern of going through the ordinances, and in so doing would worship in a very unique and informed way. A completely different experience, He likely saw, heard, and understood many more things.

I'm sure the other 9 went through the ordinance also, the scriptures don't tell any more of the story other than they went away and were cleansed.  So we are left to assume they fulfilled what Christ asked them to do.  One wonders what would be their understanding of the Priest as they spoke to the one leper afterwords, or gained insight from the actual ordinance.
Posted by Taylor at 9/20/2010