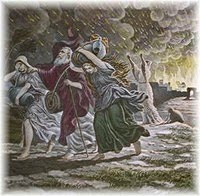 I think the account of Lot's wife is a great example of how it's possible (I certainly do sometimes) to read things into the scripture that are not there.

Genesis says this about Lot's wife: "But his wife alooked back from behind him, and she became a bpillar of salt." (Gen. 19: 26).

The image I think probably comes to most peoples mind of this lady instantly transforming into a pile of table salt, perhaps a white sandy silhouette or maybe even with lightening bolts. Yet it only said: "And she became a pillar of salt".  We read it to mean God instantaneously transformed her into our own idea of salt. However it did not say how long it took, or how it happened. Maybe it took years. Maybe she looked back and thus went back, choked on smoke from the destruction, fainted and got buried in the ash, and through a natural sequence of events based on her own choices became a pillar of salt, who knows.... I wasn't there. But putting my own interpretation on top of it and then coming to conclusions based on that is putting our own views on top of the scripture.  Maybe she instantaneously hardened and became a salt statue.  I don't know.

Just as examples, not saying what actually went down, one bible researcher said this about Lot's wife: "there are many great deposits of rock salt in the region, possibly the overthrow of the city buried her in a shower of these salt deposits blown skyward by the explosions." Another said this "having been killed by the fiery and sulfurous vapor with which the air was filled, and afterwords encrusted with salt, she resembled an actual statue of salt; just as even now, from the saline exhalation of the Dead Sea, objects near it are quickly covered with a crust of salt, so that the fact, to which Christ refers in Luke 17:32, may be understood without supposing a miracle." -Keil and Delitzch commentary.

My purpose isn't to investigate it, it's just to show how we read stuff into the scriptures. I've found much more understanding is available if I just read what it says and then ponder for understanding.
Posted by Taylor at 9/14/2010