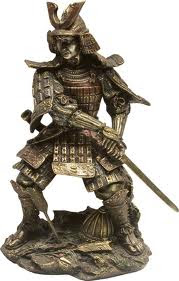 I was watching the history channel today and they were featuring a modern day Samurai Warrior.

So they invited him to come to LA to be interviewed and perform a demonstration for purposes of research.  They wanted to study and video his skills with the sword.  His first feat was on the baseball field.  They were going have a professional pitcher throw the ball as if pitching to a regular catcher but the guy was going to attempt to cut the baseball in half instead of hit it with a baseball bat.

He began with his ready position, sword sheathed, at home place.  The pitcher threw the ball something like 89 miles per hour.  The guy busted out his sword just before impact and cut the baseball in half on his first attempt.

Then they went to a shooting range. This time they wanted to up the difficulty by many many times over so they brought out a bb gun. Again a professional was brought in to point the gun and shoot at a target probably 60 feet away.  This participant wasn't going to say when the shot would be fired.  It would be up to the Samauri to hear the shot, and then respond accordingly.  The guy was confident he could hit/cut the bb with the blade of his sword on his first attempt.

So again, with sword still in it's sheath, he was back near the target when the shot was fired.  They later determined that the sound waves from the firing gun wouldn't register in the brain in enough time for the person to respond by pulling out the sward.  There would need to be a higher level of awarness, beyond what people normall percieve for him to even be able to have his sword out when the bb passed him.

All that taken into account, they brought in a slow motion camera to watch the action.  Shot was fired, and as it was firing he unsheathed his sward and literally hit the bb with the blade of his sword on the first try.  The slow motion camera caught it all.  By the time the human ear hears the sound of the gun, and is able to register it, the bee bee has already hit the target.  So this guy had such a developed ability he not only got the sward out in time, but actually hit a bb with the blade.

So on his second try he actually cut the bee bee with the blade.  A bb.  Interestingly his eyes were all but closed while he did it.  It was as if he was using his mind, yet not using it.

We're way beyond skill at that point. It was clear he was of One mind. His sword, the objects, his own body and all his surroundings had ceased to be separate entities. He could sense when the bb would be coming.  His eyes and ears did not need to register input into the brain for they were one with each other.

This obviously is something the eastern mindset has that dwarfs the western "technology".  We westerners had to slow down time in order to even see what had happened.  This man had actually performed the feat simply using his own body and awareness.

The western mind would try to mimic the steps, try to get a formula to follow for science. The Samurai on the other hand became one with his environment. He didn't dissect, and then build steps from a scientific method.  He instead became unified and became at one. He didn't need to rely on eyesight or hearing to cut a bb, he needed instead to be one with the bb. I think in that moment one would know more about God than getting a PhD in theology.
Posted by Taylor at 9/16/2010