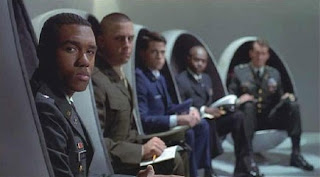 There is a scene in the first Men In Black when Will Smith is in the headquarters building along with all the military guys going through a series of tests. They are determining who is going to be K's replacement on the MIB team. There's the written test (where he screatches the noisy table across the room to use as a desk). The shooting test, where they shoot at the cardboard aliens while a strobe light flashes, when Will decides to shoot the cutout of the girl with quantum physics books. And then the "eye" exam. Right after the shooting scene Zed walks in and in a big loud voice says "Congratulations! You're everything we've come to expect from years of government training". With a smile that reveals he is being a tiny bit sarcastic. Their training was good, but there was something that their training could not give them.

Some thought they were being tested for one thing when in fact something else was being tested for. Their years of government training produced expected results but wasn't the real test in this situation. Will Smith saw the situation differently and responded differently. He in essence was the only one who passed the test. The take away from this seems to me to be that the message you receive will depend on what you see. And what message you get will determine how you respond. And how you respond, and what choices you make determines so much of life. So it'd be good to see correctly. And not just see through only the eyes of one form of training.

I think it's interesting to view many areas of life as a series of tests. We test products before we buy them, we "test the waters" when we are in a new situation. We test students to see their progress, and life seems to test us with all sorts of diverse challenges. Products, food, people are put through tests to ensure their character and quality.

I had an analysis of argument class during college, also had a communications and law class. In both classes the professor lamented that the longer an issues stays in court the less the truth of the issue mattered. The test changed from deciding the truth truth to something else entirely. It became more about the presentation, the story, the argument, the money that could buy the most educated and experienced professionals.

The thought that prompted this post was about training and testing. As it was for the folks being screened for the Men In Black position their years of training produced expected results. But it wasn't everything. As in the courtroom, the truth matters less the more certain kinds of training are employed.

Although not popular training humility is probably the most liberating and mind opening. At least that has been on my mind and I see truth to it.
Posted by Taylor at 4/25/2010