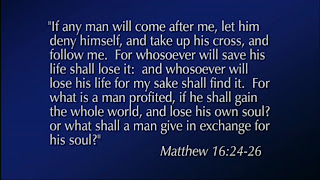 Since I was little I remember during General Conference when one of the speakers would quote a scripture or an early leader like Joseph Smith, they would often use a blue screen graphic with white letters.  It would have the scripture written out and sometimes a little picture to go with it.  I used to think this was so we could read the words while not needing to bring our actual scriptures.  But in reality I don't remember ever being asked to use or open them at conference.  Perhaps it is viewed is too distracting to be participating that much.

As I watched conference yesterday the blue scripture screen has passed on.  I've also noticed fewer scriptures quoted or cited in conference than I remember in the past.  Some scriptures are referenced, don't get me wrong, but fewer are quoted in full, and in context.  In fact it's almost rare to have more than 3 verses quoted fully and in context.  The scriptures are talked about, but not taught from very much.  Instead it seems that "good principles" are focused on, and then an occasional scripture is used as support for the chosen principle.  One recent First presidency messages didn't include any scriptures at all.

If we don't open our scriptures in sacrament meeting per a First Presidency letter.  And we are not invited to use them or open them, or even read them on the screen in conference.  Then that leaves it all up to personal time.