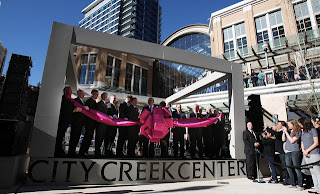 I didn't want to write about this as I like to focus on other things but..... its so blaring in downtown SLC as I drive to work every day I thought it just may be worth some thought.  Others have written about this more than I will.  I share some of the same thoughts.

Every day I drive past Citi Creek billboards.  I'm not a big fan of shopping malls.  I like having clothes however I would likely not think to purchase them without repeated suggesting from friends or family saying that it's time to buy new clothes.   But that's a side note.  The point is, downtown SLC has advertisements for this new mall that cover the entire side of buildings.  Like those big posters did when the 2002 Olympics came to SLC.  But this time it's shopping mall adds.  And as a side note some of the models have a twilight vampire look to them.  Again reasons why....never mind. 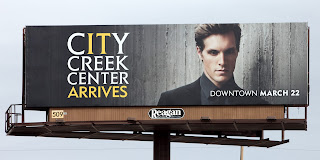 I understand the buying and selling of goods.  Business is part of our world. However it does cause a strange twinge when a church is the one building a ridiculously expensive very high end shopping mall.  And the adds feature models wearing clothes that are inconsistent with that churche's teachings on modesty and clothing appropriate for what one needs to wear in order to have a temple recommend.  The adds also feature models holding a glass of champagne.  Again, I expect this from LA, but not from a church project when that church's teachings are contrary to what the adds portray.

I realize the church is not selling the clothing, and may not have much to do with what clothing and beverages are sold there.  However that is why churches typically don't own shopping malls.  I expect a church to build temples, churches, schools, etc... Or various other humanitarian projects.  But a high end shopping mall wasn't what I would have expected.  And yes I think downtown should look nice and be a beautiful place.  But the goal must go way beyond making downtown look nice, because that wouldn't cost nearly as much.

It was reported on KSL, the Church's owned media outlet,  that the entire downtown project including the City Creek Center will ultimately cost upwards of 5 billion dollars. The shopping mall called City Creek Center was just a portion of the cost (reported at costing 1.5 billion)  http://www.ksl.com/?nid=148&sid=19428181&title=a-look-inside-as-city-creek-centers-completion-nears&s_cid=featured-1

As a comparison, The Church's Provident Living website has listed the combined total about of money given for the past 25 years (1985–2010) to Humanitarian aid, food, clothing, medical supplies,etc..  This is the amount given to the poor and needy in over 178 countries.  http://www.providentliving.org/pdf/2010_WELFactSheet_English.pdf


So in the past 25 years the church has given 1.3 billion to humanitarian assistance.  In just 24-36 months a shopping mall has gotten 1.5 billion.  When I read scriptures that accuse latter day people of loving their sanctuaries, and fine clothing more than the poor and the needy, I'm compelled to stop and consider the message of scripture as they relate to our current society.  (Mormon 8:37).   When Elder Erying gives a talk and says how members in Africa often have only one meal a day, I have to ask what justification is being used to fund a mall while others go hungry?

I try to take the scriptures seriously, but don't want to use them to judge others.  I think that misses the point.  Sometimes I think we tend to be culturally at ease, and that scriptures seems to suggest another reality.  I wouldn't even mention all this if I didn't care.  I care what the Church does because I'm in this for the long haul.  And people matter.  They matter more than things.   I see the homeless people gathered and or living just a few blocks from the mall.  Is this mall serving those in need? Or further amplifying the disparity between the rich and the poor?  In one place a man asks for food, a few blocks away one can buy a Rolex watch for up to a million dollars.  Something about all this strikes me as worth noticing (D&C 70:14).  If the scripture quoted above is referring to some other group of people, than we have nothing to worry about, and, as a people we have nothing to repent of.  But if the scripture is talking about us, than I think we should pay very close attention.

Anyway here is a bit from the LDS Church News identifying interesting church involvement in this project:

"President Eyring spoke on behalf of the Church at Thursday's ceremony, saying City Creek is now open to invite the world to come to downtown Salt Lake City — headquarters of the Church."

"Earlier, Bishop H. David Burton added that it's vital to create an atmosphere in Salt Lake City that people like and remember. "Because Salt Lake City is the capital of Utah, it's important that it is 'dressed appropriately.'" http://www.ldschurchnews.com/articles/62153/First-Presidency-attends-City-Creek-opening.html

A mall dedication serving alcohol and where you can now go to buy obscenely expensive Tiffanie's jewelry just didn't strike me as a place to find the First Presidency.  But what do I know.  I'll give them the benefit of the doubt.