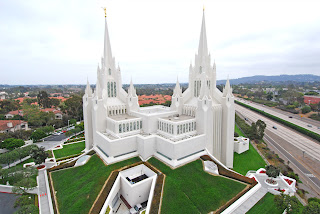 One of my favorite places is San Diego California.  We had a little vacation there last week for spring break and had an amazing time. By the way the Wave House there is very very fun. (It's the man made indoor wave that curls over, a must try!).

Day before Easter, Kels and I, her brother and a friend decided to attend the temple.  There were not many patrons that day (unlike many temple in Utah) so Kels and I were asked to be the witness couple for the endowment session.  This was a first for both of us.  I share just a tad bit of the impression.  I've been mindful so as to not to go beyond what is appropriate to say.

It's obvious to look at, but the experience itself is not that obvious unless your the one involved.  Right away the ceremony becomes extremely personal.  YOU are the one at the altar.  It wasn't someone else representing me.  Normally during the session the couple at the altar REPRESENTS each of the participants in the company.  However being represented at an altar is an entirely different experience from you actually being there yourself.  Something about kneeling is important.  Sitting and having someone else represent you kneeling doesn't have the same effect.

Now that I think about it, if your able, and the situation is one that is appropriate to do so (like making an individual covenant), the temple is would be where ideally you would be directly involved, and not have a representative at the altar in place of yourself.  Even in symbol.  For full effect it would help if it were you.  This would follow the pattern of when Christ came to the Temple at bountiful and had each person, one by one, come and feel the nail prints in his hands and feet. 3 Nephi 11:15  Time and efficiency were not big on the agenda that day, like they seem to be constantly in our day.  The individuality was what mattered.

And yes of course all the participants in our modern temples do participate in the symbolic ceremony individually.  However, for all of the participants except for 2,  the part of the ceremony where you kneel at an altar is represented by someone else.  I'm so glad for things like being the witness couple, because then the symbol means more, and points more directly to the reality.

When you are the one kneeling there, it's suddenly a whole new story.  I imagine similar things would occur as a temple worker.  The practice of having a couple represent everyone else during a session is time saving for sure, but it may also miss out on something important.

It reminds me of church history and the temple ceremony during it's early stages with Joseph Smith.  It was much much much longer then.  Part of which was due to the fact that each participant would go through the various rituals and symbolic actions for themselves, not just be represented by someone in the company.

From what I see at the Temple in Bountiful (from 3rd Nephi) Christ wants things to be personal.  I like the idea that certain divine interactions are meant to be personal, not just be represented.  Christ says he "is the keeper of the gate and employs no servant there".  It's not just a symbol, it's Christ himself.  A reality.
Posted by Taylor at 4/12/2012