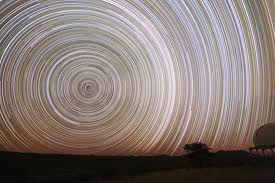 Sometimes I think we miss some of the powerful symbols in our everyday life.  Or just don't notice them.  The circle has been a symbol of perfection or heavenly things for who knows how many hundreds/thousands of years.  You draw it with a compass which uses a center point.  I've noticed some additional types of circles that for some reason I have totally missed or neglected to connect to the Gospel and my life.  I thought I'd write them down.

First is an image of Polaris that I found very fascinating.  These photos use time lapse photography usually over an extended time period to show a center point in the night sky.  It creates circles within circles around the north star that has guided many a traveler over centuries. 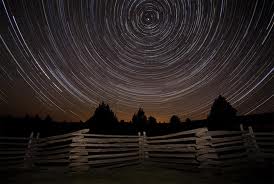 Other types of religious/spiritual circles are seen in Native American traditions and rituals.  The dance circle, often around fire or another object that is part of a ceremony or ritual.

Prayer circles is another example of a circle.  The concept has been around for ages.  Sometimes I think in the church we forget that things that are part of our ceremonies have not only been around for a long time, but other culture's have surprisingly similar customs that suggest a common truth or origin.  In 3rd Nephi is when Christ leads a prayer (3 Nephi 19).  He stands "in the midst" or as the center point, and the people "were given what they should say".   Clearly Joseph Smith did not make this stuff up.  Sometimes it's hidden but who can doubt that a form of prayer circle was happening near the temple at bountiful when Christ came to the Nephites.

Another circle is during a Priesthood blessing, or setting apart.  Those participating in a baby blessing for example stand in a circle around the baby.  The baby at that moment is the center point and intended recipient for a blessing.  It mirrors something, some forgotten truth from before we came to earth that we all seem vaguely familiar with. 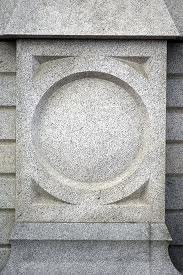 This idea of a circle seems embedded in our psyche.  And I find it very interesting. The circle inside of a square is a common symbol in sacred architecture.  The square often represents the earth (the four corners associated with the four corners of the earth) The circle often representing heaven or perfection.  Thus combining the two symbols would indicate the meeting place of heaven and earth.  The symbols can mean a whole mass of other things as well.  But it dawned in me that if you looked from above down upon a priesthood blessing for example, you'd see the earth, and then a circle. The symbols match.

The temple is supposed to be the place where heaven meets earth.  Interesting symbols.  Some of which we participate in or see in church may often not catch our attention however we may be missing what we are really doing from a heavenly perspective.

According to Hugh Nibley's research (Hugh Nibley, The Early Christian Prayer Circle, Mormonism and Early Christianity, FARMS) as well as many others, anciently in Egypt and in Native American cultures a circle dance or prayer circle of sorts was thought to open a portal to the heavens when performed at the proper place and time.  According to one researcher: “The purpose of the circle dance was a ‘stirring below’ to invoke a ‘stirring above’. . . the objective . . . was to open up a conduit, not only through space, but also through time, and take the participants from the veil of the Temple, up through the heavens, and back to the First Day of Creation . . . to the celestial throne of God.” (See Frederick M. Huchel, The Cosmic Ring Dance of the Angels, Frithurex Atheneum Press) We seen in 3rd Nephi (as mentioned above) when Christ came, such an act or ceremony did in fact open a portal to heaven as angles and fire were witnessed.

Other scriptures refer to the setting of God's throne as a sacred circle where God is surrounded by numberless concourses of angles in the attitude of singing and praising God (Alma 36:22)
This could very well include dancing around the throne of God.  Singing and dancing in a circular fashion was often part of worshiping.  More on this next post.

Other circles are the earth's orbit around the sun.  And the circle of the zodiac in the sky around the sun.  All revolving around a center point all pointing us to God. We humans often represent time by a circular clock.  Who would have thought the most basic of shapes had so much information embedded in it.

In the SLC temple as you go through the ceremony and from room to room you face different directions in each.  From start to finish the movement is in a circle, and upwards.  Almost like spiral. 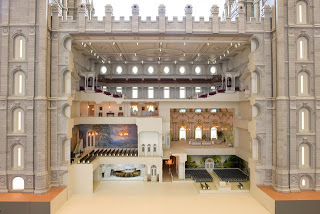 This image is from a replica put on public display at Temple Square as shown in the Deseret news.

The circle is the geometric equivalent to the number 1.   (See Beginners guide to constructing the Universe by Michael S Schneider for all sorts of fascinating things about all the numbers and shapes)

I don't have to look further than my front yard to see that God has made this earth full of very very interesting clues.
Posted by Taylor at 3/18/2012