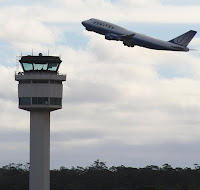 This is worth reading.  Or maybe I think so because this is my field, but I think you'll enjoy it.

There's a very odd procedure in the FAA Air Traffic Manual 7110.65.  This is the official Federal Government manual containing all the Air Traffic Controller procedures, rules, and phraseology.  It's a good 600 pages deep. Thrilling reading let me tell ya.  It's the stuff that has probably come about due to many many errors and hard lessons throughout aviation's history.  It has become more legalese over the years and gets updated all the time as a result of lawsuits.

Here is a classic phrase that makes nose sense, but which as been institutionalized.  It's Paragraph 3-10-7.

This references a tower controller who's sacred duty is to keep aircraft separated and safe in his/her airspace/runways/taxiways around the airport.

Actual quote is in red, my comments in black)

When an arriving aircraft reports at a position where he/she should be seen but has not been visually
observed, advise the aircraft as a part of the landing clearance that it is not in sight and restate the landing runway.

Even that paragraph heading smells of trouble.  But it gets worse.  As part of the landing clearance?  Really?  Shouldn't we find out WHY an aircraft isn't visually observable WHEN THEY SHOULD BE before we clear the poor pilot to land on a runway?

Notice it says a plane "that should" be seen but isn't. So we're not talking about an aircraft that you can't see due to something like fog or bad weather. As stated in this official government document, if you should be able to see an aircraft, and you can't...... the procedure is to just go ahead and clear them to land.  ha!.  Ya, that makes sense.

The FAA lawyers lost a lawsuit a while back after a controller cleared an aircraft to land and that aircraft landed at a wrong airport.  The pilot landed just fine but landed at a very nearby yet incorrect airport.  In response to the lawsuit, the FAA changed the manual and gave controllers the proper phraseology to transmit an absolutely ridiculous instruction to a pilot (above quoted in red).

To quote my instructor: "In effect the FAA has institutionalized a controllers terrible error."

I've been told this paragraph has remained unchanged for 40 years.  This is funny not only because of it's nonproductive application, but by it's longstanding.  To sum this up "When you can't see a plane WHICH YOU SHOULD SEE, clear them to land, restate the runway, and here is the proper and legal phraseology to do so.

One of my instructors gave a first hand example of this procedure applied perfectly by a new controller.  Sure enough a pilot landed at Los Alamitos Naval Air Station instead of his intended destination of Fullerton Municipal.  But everything was OK because the controller used proper prescribed phraseology by the book.

A perfect example of being DEAD right.

May the lesson carry on.  Don't institutionalize an error!