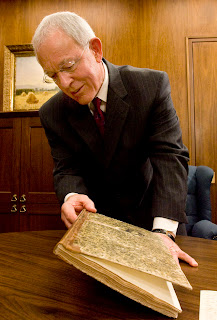 ((In his office in the LDS Church Office Building in Salt Lake City, Elder Marlin Jensen holds a journal that contains dictated and handwritten entries from Joseph Smith from 1835 and 1836. The journal is part of the LDS Church's Joseph Smith Papers Project. Jensen has been replaced as the church's historian. Monday, February 25, 2008. Steve Griffin/The Salt Lake Tribune) 2/20/08

There was a great article in the Salt Lake Tribune the other day on Mormon History.

Mormon history has it's concerning points.  With the internet you can access some pretty historical stuff.  It can be very challenging to learn new things and discover that what you thought may not be completely accurate.  The article mentions that many members of the Church are facing these difficulties.  The article I think helps point in the right direction, especially professor Givens comments near the end of the quote.  I think Faith in God will always endure.  Because it's in God, not man.

"I definitely get the sense that this is a real crisis," said Mormon scholar and writer Terryl Givens. "It is an epidemic."
There is a "discrepancy between a church history that has been selectively rendered through the Church Education System and Sunday school manuals, and a less-flattering version universally accessible on the Internet," Givens wrote in an email from Virginia. "The problem is not so much the discovery of particular details that are deal breakers for the faithful; the problem is a loss of faith and trust in an institution that was less that forthcoming to begin with."
Another issue is the "veneration for Smith and other leaders that imposes on them an idealized portrait of goodness and inerrancy out of all proportion to Smith’s own self-understanding of his role," said Givens, a professor of literature and religion at the University of Richmond. "Biblical prophets like Moses and Jonah are depicted as accomplishing God’s purposes in spite of personal flaws, misjudgments and downright bad choices."

Why not take the same approach, he asked, with Mormon prophets?
Full article here http://m.sltrib.com/sltrib/mobile/53408134-78/church-lds-mormon-faith.html.csp
Posted by Taylor at 2/01/2012