Stir them up to anger 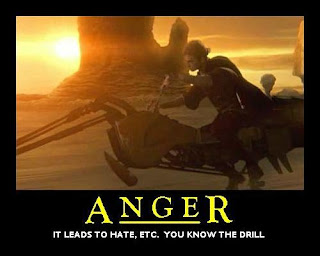 Scriptures often refer to Satan "stiring people up to anger" or the adversary will "rage in the hearts of men in the last days". I heard today of a "national day of rage" scheduled by another culture's people who clearly are very mad. Anger, can be used as a tool to cheat and manipulate a person.  Used in such a way leaves everyone closed off, instead of open. Judgmental instead of seeking to understand and learn.

I wondered today what it is about anger that is so "effective" as an adversarial tool. When someone is angry they absolutely will not consider another point of view than their own. They almost always refuse to learn in that emotional state as well. It shuts down discussion, and often just damages everything in it's path.

Scriptures teach that pride is usually one of, if not the main root problem.  Insecurity is another.  When we are insecure about something, or our beliefs, we tend to react with anger.  We can hack at the leaves of behavior and circumstance, but the roots are what often fuel it. I wonder at the absolutely SHOCKING revelation that may in fact occur after earth life is over and we look back at just how badly pride poisons almost every area of life. I'm thankful for a God who's love is greater than our/my pride, a God who organizes events in life to help us leave such poisons behind.

I used to not recognize things in my self as what the scriptures were talking about. The scriptures became very personal, with lots of tough love when I saw that they were addressing me. Anger, fear and pride always blind us to truth that could make a huge difference in our lives. Being blind produces no joy. Whereas having the "scales of darkness" fall from ones eyes is something so good, words fail to communicate it. It's a fools bargain to not willingly participate in the Gospel of Jesus Christ.

I will advocate the Gospel as long as I'm able. I need the Gospel. We all do. Odds are if a person were to imagine or picture what pride is, or blindness, the mental image would almost never be of themselves. Least it's human nature to see it in "them". Some anger is visible, some is not. Anger towards self isn't that visible but is destructive none the less.

While wondering about the above comments these other thoughts came. I think lots of times people just have emotional patterns or habits that are unhelpful. Just like habits of behavior or habits of thought, people have patterns of emotions and tend to deal with similar events in similar ways. That's part of what makes up our personality. As I recall from many sources it's widely held that a person's personality is fairly intact and developed by age 4. I think by age 21 a person's decisions are fairly well established as well. The trend and type of decisions get in a groove and don't tend to vary a great deal from the patterns.

Lots of patterns are inherited from parents, who got them from their parents and from their parents etc. Often someone will come along in a family line and recognize these various traits. They work to undo less helpful emotional or mental patterns, and instead awake, come to, and find the truth from living Christ's teachings that are freeing. It's far from some boring repetitive tradition that has no power. It's alive. Anyone can choose to do this, I think such actions would fit well into the category of what the scriptures call repentance. It sets us free.

Now is the great day of anger. But our participation isn't required. A beautiful line from my friend Denver sums up this thought: "Be slow to anger, quick to forgive; open and prayerful. The great plan to cheat your soul will not succeed with you if you remain humble and open."
Posted by Taylor at 4/25/2011