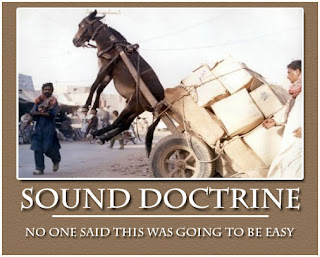 “Not only are there apostates in our midst, but there are apostate doctrines which are sometimes taught in our classes and from our pulpits and which appear in our publications. The these apostate precepts of men cause our people to stumble. As the Book of Mormon, speaking of our day, states: “..they have all gone astray save it be a few, who are the humble followers of Christ; nevertheless, they are led, that in many instances they do err because they are taught by the precepts of men” (2
Nephi 28:14).” (Pres. Ezra T. Benson, CR April 1969 )

Not too many years prior to President Benson’s statement, President Joseph Fielding Smith had entered the following notation in his person diary:

“I attended sessions of meetings for the institute teachers, held in the assembly room on the fourth floor of the Church Office Building. I cannot say that I was very greatly edified. Too much philosophy of the worldly nature does not seem to mix well with the fundamentals of the gospel. In my opinion many of our teachers employed in the church school system have absorbed too much of the paganism of the world, and have accepted too readily the views of the uninspired educators without regard for the revealed word of the Lord. What to do about it, I do not know. It is a problem for the Presidency to consider. It is a very apparent fact that we have traveled far and wide in the past 20 years. What the future will bring I don’t know. But if we drift as far afield from the fundamental things in the next 20 years, what will be left of the foundation laid by the Prophet Joseph Smith? It is easy for one who observes to see how the apostasy came about in the primitive church of  Jesus Christ. Are we not traveling the same road?” (The Life of Joseph Fielding Smith p
212. Deseret Book Co., 1972 )

You don't hear things like this very often, which makes me wonder if ether the problem has been eradicated.... or if instead we're numb to the problem and in serious trouble. Both those statements were made decades ago. I rarely hear ANY talk of such things now even to the point it would meet with heavy resistance from some. Despite that, i think those warning are just as timely now, perhaps more so.

Go check out Deseret book, there are almost almost no doctrinal books about the Gospel are being sold.  Deseret book has publicly stated "Doctrine doesn't sell".
Posted by Taylor at 4/26/2011