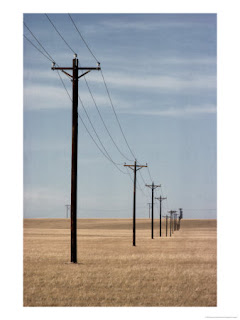 Today on the way home from school there was a bad car accident. Car versus pole. The pole won. It was one of those large diameter steel poles the stop light is connected.  This one was positioned up off to the side of the road corner. To get there the person had to veer off the lane quite a bit, go up the curb and aim at the pole. To both sides of the pole was nothing, maybe some small bushes.

A psychiatrist friend of mine, Dr. Paul relates an awesome study that was done. It was a study in a Midwestern state in the US during winter. Along a particular stretch of highway there are telephone poles spaced hundreds of feet apart. In the winter when it snows the majority of the cars that slide off the road hit one of the poles. It got a lot of attention and some studies were done.

The conclusion revealed that the drivers went where they looked, not where they wanted to go. These drivers all stated they were just trying to regain control of their car and didn't want to hit the pole but ended up going right towards it. You go where you look. If you focus on something, you will hit it. When drivers are anxious or scared they focus on the object they want to avoid, which of course leads right to it.

I have this feeling that this concept covers MUCH more than just cars hitting things. If we go where we look we should be careful what we are focusing on, in life and in the car chances are with focus, we'll head right for it.

Good idea to stop worrying. And start looking at better things. Today I'm going to focus on the good.
Posted by Taylor at 6/02/2010