Last week at a holiday party family was discussing and speculating on changes the LDS church could make in light of President Nelson's recent comments.  Some of the forecasts turned out to be fairly close.  Just in the last day or two LDS Church makes quite a number of changes to the Temple Ceremony.  Link.

Some changes aren't overly difficult to predict as very often you can get an idea based on what social, political, legal, and economic pressure is being applied to the Church.  Gender equality, Women's issues, sexism, abuse etc... have been a big one in recent years (Ordain Women #Metoo)  and now the temple ceremony has changed.

Below are a few screenshots from the LDS Church handbook 2 regarding the Word of Wisdom including the official interpretation of Hot drinks as Tea and Coffee.

Here are some interesting clips from missionary manuals.  Investigators MUST obey this before and after baptism per the manual.  The 1988 Missionary training manual had the below question as part of the baptismal interview questions on pages 234-235:  link.  Screenshot below because who knows how long links stay alive.


That part about tea, coffee is no longer present in the current day baptism interview questions. Distance from tea and coffee started a long time ago.  And that distance may grow.

There was an interesting poll reported on by the SLTRIB.  More than a thousand Mormons, millennials differed from their parents' generation about the nature of Word of Wisdom obedience.

More than 75% of baby boomers (born between 1945 and 1964) and the older, so-called silent generation viewed not drinking alcohol as essential to being "a good Mormon," while 40 percent of millennials (1980 and 1998) saw it that way.  Here come the millenials.

As to how tea and coffee affect being a good Mormon, both numbers were lower and the gap was closer — 51 percent of boomers/silents vs. 31 percent for millennials.

Members of Generation X (1965 and 1979) fall between the boomers/silents on whether no alcohol is essential — 51 percent. On coffee and tea abstinence, respondents in this category came in similar to millennials — 31.8 percent.

So, only 31.8 % of younger folks think coffee and tea abstinence as essential to being a good Mormon and 51% of the older folks.  The season appears to be approaching for a change.  Unless the Church wants to loose the next generation, they are going to have to be more tolerant.

For a number of years, the "hot drinks" was about the caffeine. Caffeine surely was the culprit.  Or so thought many Church leaders.  Which is why BYU didn't carry caffeinated beverages for a number of years.  But during Mitt Romney’s 2012 U.S. presidential campaign the LDS church issued a statement that “the revelation spelling out health practices … does not mention the use of caffeine”.

The revelation also doesn't mention tea and coffee.  So if that is the logic then it paves the way for other changes.  Perhaps "hot" drinks really always did mean "hot" as in temperature. The World Health Organization would support that. Link.  Years after that statement in 2012, finally in 2017 BYU did start selling caffeinated beverages.  It just takes time for the prior traditions to end and new ones to form.  The question is, have enough years passed on the tea and coffee and is there a Church president willing to change things up?

If you live in South America this is a big deal.  Having lived there for 2 years I know their Mate is a big deal and various varieties of it get regional approval as it would be very hard to restrict them from something vital to their culture.  I can only imagine the difficulties Europe and Asia have with tea.  Trying to figure out which tea is ok and which isn't is very complicated as no one knows whether it's the caffeine or some other substance, stimulant, or addictive property that has never been specified by the Church.

A look into Church history, post Word of Wisdom (Section 89), shows that not only did the Pioneers bring tea and coffee with them across the plains, it was one of the important items on the bill of particulars of what to bring.  This can be found in the Nauvoo Neighbor, Link. 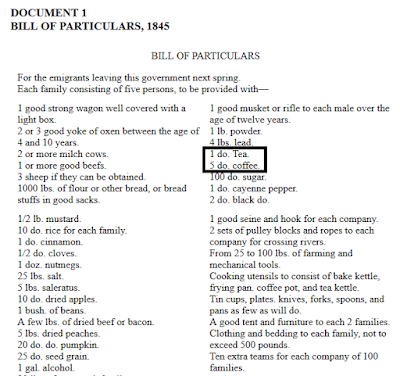 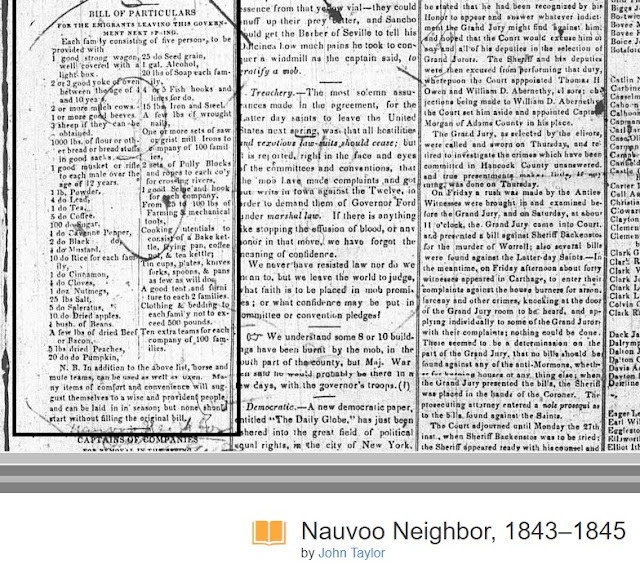 (Also of note if you go to the JSP link it says: 1 Keg of Alcohol "Brandy or Gin" of 5 Gallons for each 2 families.  But that's a side note).

So tea and coffee were commonplace and expected to be brought across the plains (along with coffee pot and tea kettle least anyone think these items were not going to be consumed).  Interestingly consuming it now it will prevent a temple recommend.  The whole picture starts to look quite interesting.

All this together makes the official interpretations look either out of date or just sort of random and changeable depending on opinions or preferences of who ever the leaders are.

"Hot" apparently didn't mean temperature over the past century, and it wasn't about caffeine. So then what was it about?  When there's no reasonable answer to give millenials, at some point that will result in more and more pressure to explain things or else change the policy.  Church spokesmen need only hint at words like "revelation" it could change without resistance.

Therefore, I suspect the Church will distance itself from rigid tea and coffee restrictions or be more tolerant. The focus could easily shift to overall health and consuming things that are good for you. Moderation. Imagine a President of the Church who's also an MD re focusing the Word of Wisdom on overall health and wellness and slowly discarding the tea and coffee thing. Seems not only fitting but plausible.

Many members avoid tea and coffee but ignore other parts of the Word of Wisdom.  The Church has to be well aware of this lopsided interpretation that’s all too common and stems from the church’s own lopsided focus.  It prevents obtaining a temple recommend but quickly starts to look odd when given some thought.  Many millennials have no issue with an Iced Coffee since it clearly isn't a "Hot" drink.

Then we have the energy drink industry, and the monster drinks the younger generations are into which in some cases have effects more detrimental to the body than coffee not to mention the folks who self admit to being addicted to various sodas (or broadly "coke" if you live in the south).  Both tea and coffee are not all that far removed from their respective plants and herbs found on earth. Unlike some of the other man engineered substances which plague people in our day.  But back to the tea and coffee as the official interpretation of hot drinks.  The early interpretations don't really fit for a global Church model they are headed towards.  They make even less sense when we look at the history of Mormon Pioneers bringing tea and coffee with them across the plains.

Based on recent changes made by the LDS church, one trend is to take what a good chunk of members are already doing and paint a target around that thing. (Guys will understand this if they stop to consider their own "home teaching" practices and how well the new ministering program conveniently puts a bulls-eye on what most males were already doing. Such as once in a while visits, stop and chat in the street etc etc..)  Putting a target on what people were already doing seems to ensure a good response to the initiative.  Guess we'll see if that pattern continues. I haven't talked with anyone with any inside information, nor heard rumors of possible future changes.  These are just my own musings.

And here is a graph of the frequency of the phrase "word of wisdom" in General Conference since the 1850's.  The modern day trend is interesting. 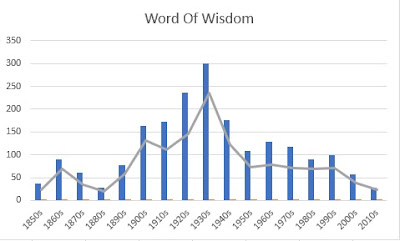 I give it a few short years and the screen shot below may no longer be found in handbook 2, nor be grounds to prevent someone from obtaining a temple recommend.  It may just slowly slip away.  But who knows.  What I do know is you'll get a very puzzled look from pretty much any LDS ward member if you ask them whether or not the Word of Wisdom is a commandment.

If the person happens to have read the first verses of section 89 that say it's "Not by way of commandment" asking them when it changed from a greeting to a commandment will get an even more puzzled look.  Therefore, it just seems perfectly situated to undergo a modern change.  Only a matter of time.  At minimum we should see an increased tolerance of coffee and tea consumption since the millennial are already doing that, and they will eventually fill leadership positions.

This would certainly increase popularity.  It would almost light up the Church with a certain buzz.  With so much changing so fast, it makes it seem like just about anything could change.  I don't really care one way or the other on this as I'm not a coffee fan.  But I'm interested in what changes inside Mormonism and why.