History of The Lectures on Faith 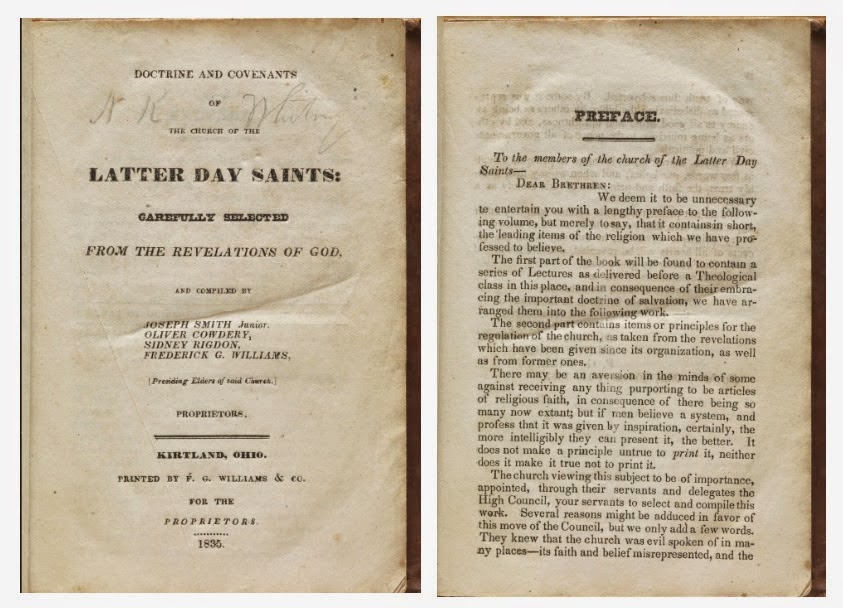 Below is an excerpt from a lecture in Idaho Falls about The Lectures on Faith. The paper is titled "Faith". It's by Denver Snuffer and was given on 9-28-13.  The entire lecture is great reading and the author makes them available for free on Scribd. Link

I thought this section about the History of the Lectures on Faith was important, and something very few know about.  The Lectures used to comprise the "doctrine" portion of the Doctrine and Covenants.  Our current scriptures no longer include them. Below is the excerpt.

Since they've been removed from the scriptures, there are a lot of people who are trying to vindicate the decision that was made to remove them from scripture. One of the arguments that is made in furtherance of removing them from scripture was that it was primarily a product of Sidney Rigdon's pen .It was primarily of product of Sidney Rigdon' pen. They've done word typing and computer analysis, and they've come up with probability of authorship. It doesn't matter if Sidney Rigdon had a hand in the document, because Joseph Smith edited it. And Joseph Smith corrected it. And Joseph Smith vouched for it.

In the preface to The Lectures on Faith in the 1835 edition, (which you can read in the Joseph Smith Papers, Volume 2 of the Revelations and Translations beginning on page 311 of that volume), you can read the preface (on page 313). And I'm reading you this over Joseph Smith's name. “We deem it to be unnecessary to entertain you with lengthy preface to the following volume, but merely to say that it contains in short the leading items of the religion which we have professed to believe. The first part of the book will be found to contain a series of lectures as delivered before a theological class in this place. And in consequence of their embracing the important doctrines of salvation, we have arranged them into the following work. We do not present this little volume with any other expectation than that. We are to be called the answer to every principle advanced. ” [This is Joseph Smith saying, this is a document that I intend to vouch for. In his official history, January 1835 he says: “During the month of January, I was engaged in the school of the elders and in preparing the lectures on theology for publication in the book of Doctrine and Covenants."]

You find that in the History of the Church Volume 2 beginning at page 180. He defended every principle that was advanced. It was brought before a Council of the Church. And I'm reading from the Joseph Smith papers. This is on page 307 of Volume 2 of the Revelations and Translations. “On 17 August 1835, a general assembly of the church met for the purpose of examining a book of Commandments and Covenants that had been compiled and written by the publications committee.(Joseph Smith headed the publications committee.) This committee having finished the said book according to the instructions given them, (the minutes read) it was deemed necessary to call the General Assembly of the Church to see if the book be approved or not by the authorities of the Church. That it may, if approved, become a law of the church, and a rule of faith and practice of the same.”

Though the assembly was convened by the Presidency of the Church, several of them were absent at the time of the vote. So the responsibility of presenting the book to the conference fell to Oliver Cowdery, a member of both the presidency and the four man publication committee and Assistant President of the Church at the moment that this took place. Sidney Rigdon, the other presidency member and committee member, stood and explained the matter by which they intended to obtain the voice of the assembly for or against said book. Voting on the book proceeded by quorums and groups with the leader of each group bearing witness of the truth of the volume before his group voted. And then they proceeded to vote. And they voted by quorums from the least to the greatest. Then after all the quorums of the church had accepted the Doctrine and Covenants, the first 70 some pages of which were The Lectures on Faith, the General Assembly voted, including everyone who was present. Children, women, everyone voted. They all sustained this as the Doctrine of the Church.

That's a lie. The Joseph Smith Papers, if you will read them today, tell you that statement is not at all the truth.  Part of what I hope to get to tonight, and if not tonight then in Logan, are the reasons why Joseph Smith called this "doctrine" - important doctrine. "Leading items of the religion." And that he would answer to every principle that was advanced in the document. Now to his credit, Joseph Fielding Smith, who was on that committee said in 1966: “I suppose that the rising generation knows little about the Lectures. In my own judgment these Lectures are of great value and should be studied. I consider them to be of extreme value in the study of the gospel of Jesus Christ.”And in a talk given by Elder Bruce R. McConkie at Brigham Young University, (the son-in-law to the one of the committee members,whose words I just read), in January 24, 1972, Brother McConkie said: “In my judgment it is the most comprehensive, intelligent, inspired utterance that now exists in the English language that exists in one place defining, interpreting, expounding, announcing, and testifying of what kind of being God is. It was written by the power of the Holy Ghost, by the Spirit of Inspiration. It is in effect, eternal scripture. It is true.”
Posted by Taylor at 8/24/2014