What is the real issue? 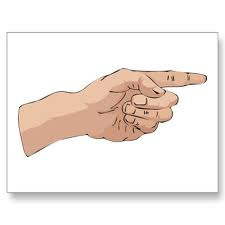 This scripture has something classic, and is very interesting. (Mosiah 17: 7-9) Wicked King Noah has just been prophesied about by prophet Abinadi. The king is upset at hearing that he is wicked and that he will be destroyed unless he repents. Here is what the King says starting in verse 7: (I think there is truth that when we point a finger at others there are three more pointing back at ourselves)

7 And he said unto him: Abinadi, we have found an accusation against thee, and thou art worthy of death. 8 For thou hast said that aGod himself should come down among the children of men; and now, for this cause thou shalt be put to death unless thou wilt recall all the words which thou hast spoken evil concerning me and my people.  9 Now Abinadi said unto him: I say unto you, I will anot recall the words which I have spoken unto you concerning this people, for they are true; and that ye may know of their surety I have suffered myself that I have fallen into your hands.


Notice how the accusation was about God himself coming down among the children of men, this was why Abinadi was apparently worthy of death. These are religious, doctrinal reasons for accusing Abanidi, somehow this offended them deeply.  Yet, the reason Abinadi would be let off the hook is if he would "recall all the words thou has spoken evil concerning ME and MY PEOPLE".   The alleged accusation dealing with false doctrine, and the way to get out from under the penalty of that accusation are not even the same subject. Did you catch that?  One dealt with God, and doctrine, the other deals with retracting statements about the King and his people being evil. They would forget all about the God coming down stuff, and let him go if only Abinadi would retract the part about the King and His people being evil. A bit of a disconnect there if you ask me.  An interesting loophole.  Abanidi wasn't phased. He taught true doctrine, and refused to retract the truth he had spoken about the King and his people.

If Abanidi was worthy of death for saying God would come down, you'd think retracting that statement would then free him of the accusation.  But it didn't.  The real issue, as the priests and king saw it, was the personal attack they felt.  Goes to show that it's foolish to act when angry, and how important it is what folks you choose as your advisers. His anger blinded him and he was lead astray by those advisers he trusted in.  They initially accused him of preaching false doctrine, but the real issue was he offended them.  They would use all sorts of backwards logic to condemn him.  Because they were offended.  It didn't matter that what he said was true, they wanted him dead because he offended them and made them look bad.

Abinadi was such a great type of Christ. He was accused, maltreated and sent back to God by the people he was trying to save, in reality he was innocent and indeed sent from God. Abinadi was very much a type of Christ.

On a side note related to where fingers point, notice how when you ask for something, and then go to receive it with your hand, like with slightly cupped hand and upward facing palm that all of your fingers are pointing upwards (truly from above is where we receive) and the thumb is towards the giver. Very different than an accusers finger placement.
Posted by Taylor at 11/09/2010