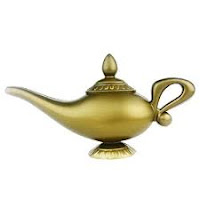 My wife and I saw the new Aladdin movie a little bit ago.  The new live action version was very  entertaining.  Couple really interesting parallels stood out to me to scriptural ideas.  Obviously not everything matches up all nice but here are some fun ones:

-The lamp was in a cave.  Prophets frequently were reduced to hiding in caves. Caves are often where sacred records were kept and stored for safety and preservation.

-There's also the idea of not touching anything unclean and the parallel with Aladdin not being allowed to be distracted by all the false unclean shiny looking items in the cave of comparatively little value.

-Only a worthy person could enter the cave of wonders. One who's worth was within, not on the exterior.  In contrast to the unworthy villain who's external worldly worthiness and wealth contrasts the poverty and humility of the other.  To obtain what scriptures speak of requires worthiness and humility.  The villain seeks to abuse and use the worthy in order to enter in the wrong way to obtain what can't be obtained that way.

-In a scriptural sense the worthy person was Christ who has also been symbolized by a rock and or or a protective cave within a rock.  We find Christ by following His messengers and obeying His teachings which then allows us to enter in and receive a Holy Ghost to reside in our own body-lamp/vessel.

-Aladdin's physical lamp had a type of spiritual being inside without a body.  Trapped in some ways.  This reminded me of the scriptures that speak of the spirit world being viewed as bondage in the absence of the physical body.


D&C 138: 50 For the dead had looked upon the long absence of their spirits from their bodies as a bondage.

T&C 31:4 As you have asked of me concerning these signs of my coming, in the day when I shall come in my glory in the clouds of Heaven, to fulfill the promises that I have made unto your fathers, for as you have looked upon the long absence of your spirits from your bodies to be a bondage, I will show unto you how the day of redemption shall come, and also the restoration of the scattered Israel.

-The happy-go-lucky goofy genie we know from Disney's animated film is pretty distant from the middle eastern origin of the Genie or "Jinn" who were more like a class of spiritual beings or daemons.  Such beings are accepted part of the culture in many areas of the world with myths and stories dating back who knows how far (whole book about them here).  Although also distant it's interestingly related to the scriptural truth about the Holy Ghost residing inside a person.

-When Aladdin's realizes he's trapped and the cave is about to get very dark, the lamp provides hope to light the way.  It reminded me of the Net Testament 10 virgins parable with their lamps. They all had lamps. Some were wise and actually had oil in them, which could fuel fire and some brought the lamp but it didn't have much of anything in it.  Fire, Oil, and the Holy Ghost are related in scripture. The lamps stored the potential for fire and light.  All virgins slept, but the unprepared were could neither buy nor borrow the oil at the last minute.  At midnight! Precisely at the darkest hour, when least expected, the bridegroom came.  The lamps lit the way.  The unprepared couldn't enter in the final destination.

-Making wishes to the spirit being.  In the west it's worded more like "offering prayers".  Distant parallel but definitely related.  Scriptures warn not to ask amiss or ask to consume the answer upon your lusts.  Which is apparently what most of the people did before Aladdin and what the movie's villain did do.

-On the subject of making requests.  Interesting connection to scripture.  There's that moment in scripture where at a certain point Christ asks Disciples "Ask what you will" of him.  In 3 Nephi for example 9 of the 12 ask for one thing and 3 ask and are granted their request for what they desired in their hearts. And the petitions were answered.


JSH 13: paragraph 20: And the Lord said unto me, John, my beloved, what do you desire? For if you shall ask what you will, it shall be granted unto you. And I said unto him, Lord, give unto me power over death, that I may live and bring souls unto you. And the Lord said unto me, Verily, verily I say unto you, because you desired this, you shall tarry until I come in my glory, and shall prophesy before nations, kindreds, tongues, and people.

Interesting how many Gospel parallels are sprinkled everywhere, even in some random entertaining movie on the weekend during date night.

On an interesting side note about the 10 virgins.  I asked Kelsey why she thought all the virgins in the parable from the New Testament were female.  After re-reading the scriptures the scriptures don't specify their sex.  The custom of the Jews was for the bridesmaids of the bride to respond to the announcement of the coming of the Bridegroom with their lamps.  So that's likely the origin of them only being female.  But that image in our head might be misleading.

I believe that the Ten Virgins represent the people of the Church of Jesus Christ and not the rank and file of the world. All of the virgins, wise and foolish, had accepted the invitation to the wedding supper; they had knowledge of the program and had been warned of the important day to come. (Faith Precedes the Miracle, p. 253-257)


And at that day when I shall come in my glory shall the parable be fulfilled which I spoke concerning the ten virgins, for they that are wise and have received the truth, and have taken the holy spirit for their guide and have not been deceived, verily I say unto you, they shall not be hewn down and cast into the fire, but shall abide the day, and the earth shall be given unto them for an inheritance.


Afterward came also the other virgins, saying, Lord, Lord, open unto us. But he answered and said, Truly I say unto you, you know me not

How did they not know him?  Perhaps because no record born to them with fire and the Holy Ghost?


And whoso believeth in me believeth in the Father also, and unto him will the Father bear record of me, for he will visit him with fire and with the holy ghost.  (NC 3 Nephi 5:9)

In some unexpected way seeing the movie reminded me of scriptural warnings about the Second Coming.  Not just have a lamp, but have something in it that can fuel fire.  What I see and hear taught at Church is incapable of fueling anything or of creating any such spark or fire.  It's decayed so much from where the religion began.  I conclude attending church does not put oil in your lamp.  All those religious checklists don't either.  You have to get the oil from God by following God, not man or man's religions.  God is where the fire comes from.


Wherefore, we, receiving a kingdom which cannot be moved, should have grace whereby we may serve God acceptably, with reverence and godly fear, for our God is a consuming fire