Named and Proclaimed to Reign

President Nelson of the Church of Jesus Christ of Latter-Day Saints has recently embarked on another traveling ministry tour.  Similar to the world wide tour last year, and the Asia one, this year it's a Pacific ministry tour.

During the previous tours and during this Pacific ministry tour I sometimes look for transcriptions or video of the ministerial message he took to the people. There aren't any. There are only news highlights of only small excerpts of what he says. There are plenty of PR clips, PR images with children, and pictures with civic or government leaders.  It almost looks more like a vanity tour than a spiritual or prophetic tour with a message from God.

I did see that he gave one governmental leader, who's a former Mormon, a fancy Book of Mormon with her name embossed.  Oh, and like he did to the single mom in Africa, he also gifted The New Zealand Prime Minister a picture of himself and counselors (see caption). 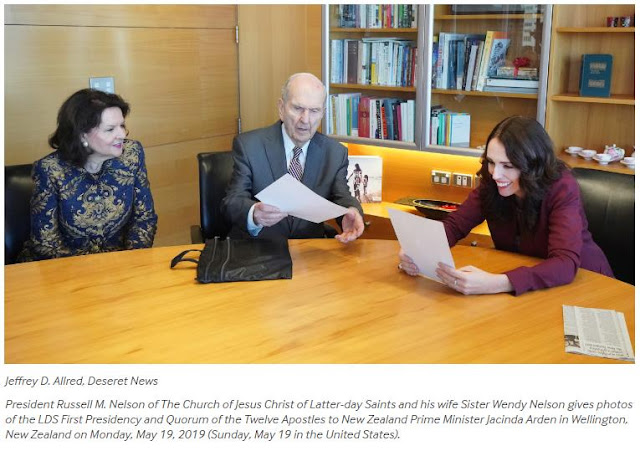 When the early apostles had ministry traveling tours I don't recall any examples of it being a public relations endeavor.  It was instead to preach a message and not to point to themselves, give out pictures of themselves, or gain favor with the world. It got them thrown in prison, severely persecuted, or killed.

In 2019 the actual message preached seems to be a much less important (sometimes hardly mentioned) part of what the Church publicizes of President Nelson's ministry travels. When we do see highlights of the message it's never in full, and it's never anything not already found in any given generic Church produced manual.  The focus is definitely on the President himself and his own prestige. What does he say to these governmental leaders?  Does he preach repentance?  Whatever he's saying it's not producing any of the results early apostles endured.

But that's neither here nor there.

Something did stand out to me on the Church's web page about the recent Pacific Ministry tour.  It's something mentioned in another post but it stood out to me again.  Something very misleading.

This is the last paragraph from the Church News Room article on the Pacific Ministry.  Note the date.

The paragraph from the Church Newsroom has a link on the word "sustained" which takes us to the below for additional information.  Again note the dates:

It says President Nelson was named 17th Church President and this was announced on Jan 16th 2018.  This special live broadcast was specifically stated to be for the "members" of the Church.

Then it says President Nelson was sustained and set apart January 14th.  The announcement was 2 days after some sort of sustaining and ordination by a small group inside an upper room of the temple, on a Sunday (Temples are closed on Sundays).  Whatever happened, it happened in secret, outside of view of the public, and without any involvement or vote by the members.  The members did not even know about the ordination and sustaining, until the Church announced to them what had already taken place 2 days prior.

Can you imagine if a POTUS took the office and 2 days later the White House announced it to the people before the people even voted?  The country would erupt in fury and cry corruption! That goes against the Constitution.  But if  when this type of thing happens in religion I'm not sure people even notice it.  Even if a POTUS did this, what would be even more weird would it be to offer the people a chance to vote a month or two later for that political leader ALREADY sworn into office?

That's like 2 cups of pandering, 1 cup lip service, and 3 cups of distraction, and no one would buy it.  But if a top Church leader is sustained and ordained and takes the helm, and they announce it, and then months later the people get to vote on it?  Surprisingly no one cares. ♫  "Juuuuuuust a spoonful of pandering helps the medicine go down.."  What's concerning is this suggests those in authority did not believe they needed the people in order to assume the power or position.

Did everyone expect President Nelson would be the new President?  Of course.  But that's because of process and procedure handed down to us.  This procedure is not found in scripture.  But even still, common consent was required.  The laws of the Church and the laws of America for a President have some things in common.  Like a vote.  Before the person assumes power.  Whatever they don't have in common, they have THIS in common.  And that requirement was blatantly broken with President Nelson's ordination.  Voting after the fact just makes the previous rise to power appear legitimate.

On an interesting side note: D&C 107 talks about the First Presidency in a very overlooked verse:


22 Of the Melchizedek Priesthood, three Presiding High Priests, chosen by the body, appointed and ordained to that office, and upheld by the confidence, faith, and prayer of the church, form a quorum of the Presidency of the Church.

Chosen by the body.  Clearly that is not how the First Presidency is chosen in our day. The President is the longest living Apostle and his counselors are chosen by the President himself, not the body.  Clearly differing from what we read in the scriptures.  It makes sense to uphold with faith and prayers someone you chose.  But it makes a lot less sense otherwise.  Misalignment with scripture seems to really not matter to most members in 2019 since it's widely accepted and taught that living leaders trump all others.

Least you think the above analogy to politics and the President was too distant from how the Church was supposed to propose its leaders and receive a vote of the Church before they assume the position, below is from the D&C Church manual about Common Consent:  (underlining mine)


The announcement by Elder D Todd Christopherson was not a proposal. It was, as the newsroom said, an announcement and proclamation of what had already occurred.  So when the newsroom says President Nelson was sustained January 14th 2018 that is either completely the wrong date, or it's true and represents a very blatant departure from the Church's and scripture's teachings about common consent.
The new Church President likely signed some legal papers that day making him the sole owner of the entirety of the Church's assets but the actual sustaining vote for President Nelson as Church President, by the body of the Church, didn't happen until the Solemn Assembly held for that purpose during the April 2018 General Conference.  (The Solemn assembly was technically on the last day of March)
Here is an excerpt from that assembly meeting: Full link here.  Seems like that should be the date cited for the sustaining since according to Church law that is what authorizes the person to hold the position. To use any other date seems to only proclaim how scriptures and church laws were disregarded.  But here's the quote from the solemn assembly:

Dating from October 10, 1880, when John Taylor was sustained to succeed Brigham Young as prophet, seer, and revelator and President of The Church of Jesus Christ of Latter-day Saints, each of these occasions has been designated as a formal solemn assembly of the body of the Church to express the voice of the Church.

We will vote by quorums and groups. Wherever you are, you are invited to stand only when requested and express by your uplifted hand that you choose to sustain those whose names will be presented. You should vote only when asked to stand.

Goes to show that someone can assume the highest office in the Church with only a few other men with high callings agreeing to make it so behind closed doors.  How does that sound to you?  Any inklings that suggest to your mind we may be seeing unfortunate patterns with power we were warned about in scripture?   There is way way more to the topic of succession of Church Presidents but this post is just about this one element.
To recap: The Official Newsroom identifies a sustaining date for President Nelson months before the Church body was even offered the chance to vote.  Why does this matter?  It implies that in 2019 leaders can do whatever they want and they have such confidence the people will simply vote in approval after the fact that they go ahead and skip laws of consent and scriptural commands. Does this sound like Godly Priesthood power to you?  Not a very reassuring first act by the new First Presidency.
This topic has been mentioned before but it caught my eye again as I read about the current Pacific Ministry tour.  I reached out to the Church website and newsroom media relations department and asked if perhaps the wrong date of sustaining was utilized since the Church did not sustain President Nelson until months after the date they use.  I didn't receive a reply and likely never will.
Side Note:
When the members and press were first introduced to the new counselors with that special broadcast I found the setting and alignment with the painting of Christ above President Nelson to be interesting.  The locations of the broadcast, pictures, and camera angles are likely deliberate and intended to imply alignment with Christ (similar visually suggestive alignments are common in Church pictures, manuals and magazines). 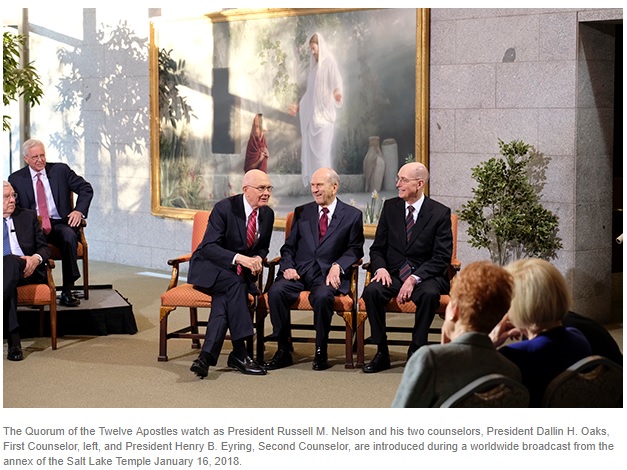 Another example from the Come follow Me Manual (these images were together and part of a mass e-mail the Church sent out).  President Nelson clearly sitting in the position of and acting in visual symmetry with Christ. 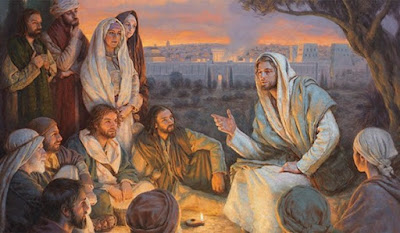 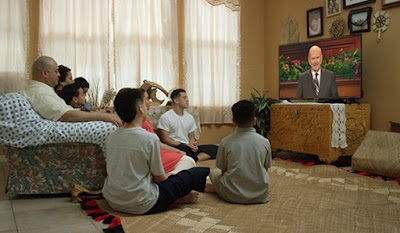