D&C 93 24-25 says: And truth is knowledge of things as they are, and as they were, and as they are to come; And whatsoever is more or less than this is the spirit of that wicked one who was a liar from the beginning.

Everywhere I go lately someone or some company really really wants to know my opinion.  The doctor's office will not stop calling me wanting to know my opinion of the doctor my kids see, the office, the staff, the facility etc etc..   The grocery store receipt offers me rewards and chances to win things if I will only fill out their survey.  The restaurant where we eat dinner also is offering rewards and gifts cards if I will only take a few minutes to respond to their survey.  Some random phone caller keeps calling wondering if I will take a few minutes and answer a few questions about my experience with different consumer products, political views, or whatever.  Churches are no stranger to the opinion polls either.  Religion, unexpectedly to me, is a heavy hitter for wanting to know public opinion.  Including the LDS church.  It heavily affects their decisions and policies.  Which struck me as interesting.  Public opinion usually mattered very little to those who found religions, or those upon whom the religion is based.

My place of work also is a heavy hitter for opinion poll results.  Opinion opinion opinion.  Big decisions get made on such results.

I left the car dealership after a car repair a few days ago and was contacted three different times to make sure I was going to respond with the highest possible score when my survey arrived via e-mail.  Facebook can't leave me alone for 1 day without wanting me to survey something, I also can't seem to call any business without being asked if I will remain on the phone after the call to answer "a few short questions", websites do this as well. 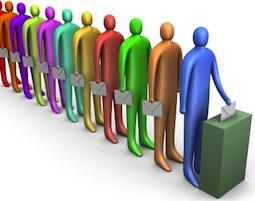 You'd think opinion was the same thing as truth nowadays.  Many of them go to extreme lengths to ensure I answer the questions how they want me to.  Some survey questions are worded in such a way that I think completely negates any of my answers.  They are leading questions.  And before I even go to answer them I'm contacted to make sure I mark "extremely satisfied" on every question.

I'm not saying feedback is bad, or useless.  It can be extremely useful.  There are businesses who will pay good money for the results of these opinion surveys.  And some places make good change based on new awareness of how people think and feel about something.  The more you know what people want, the better you can sell it to them.  Good business I suppose.

What I think can get lost in this mass of opinion is the actual truth.  Knowledge of truth.  Sometimes public opinion is dead wrong.  Surveys and opinion polls are the tools of man, for man to profit thereby.  If your multi million member religion gets results of mass opinion polls regarding various religious topics, and makes policies and decisions based on those, that to me is not the same thing as getting revelation from God.  It's a clever and and (not so) subtle substitute that can make it seem like you're "in the know" and "understand the issues of your day".  Public opinion surveys never were, isn't, and never will be revelation.  But if you felt so inclined you could use mass opinion as a mask and a tool to substitute for things like actual revelation.  For every truth there is a counterfeit, for every to there is a fro.

The truth is something different entirely from mass opinion.  You may argue that mass opinion poll results show or revel the "truth" of what the population thinks.  But what the population thinks at any given time (especially in our world) is still not how scripture defines truth.  And it's certainly not something historically you would want to put a lot of stock into.  Public opinion sways too and fro.  It's fickle.  It may affect an election, but it does not necessarily reflect, nor determine, nor reveal truth.  Scriptures say the "destroyer rideth upon the waters"  D&C 61:19.  And what are the waters?  Revelation answers that for us.  Rev 17:15.  And he said to me, The waters which you saw, where the whore sits, are peoples, and multitudes, and nations, and tongues.  So there is a strong connection between "waters" in the scripture and people, and their opinions.  That connection is up to you to see though.

Personally and on a personal level I think there is something higher to seek after and trust in than public opinion.  It hails from a place that far predates our modern life.  It influences us whether we are blind to it or not.  And it will be there long after we are passed from this life.  It comes via revelation from God.  It makes public opinion polling look like the arm of the flesh tool that it is.   A knowledge (not opinion) of things as they are, were, and are to come is how scriptures define truth.  We should expect counterfeits, distractions and substitutes.  They are everywhere.  I can hardly see the truth for lies some days.
Posted by Taylor at 1/20/2016