Below is a screen shot from the Official Church Facebook page of President Monson this week.  (If the picture is blurry click on it for better quality) 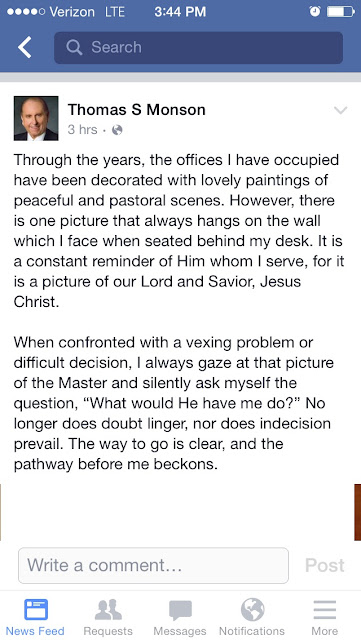 Most members assume President Monson, as a prophet of God, physically sees, meets with, or has encounters with something more than a picture of Christ. But that's an assumption, not something President Monson has ever himself said or confirmed. It's quite common in scripture for this to occur, in fact it's everywhere if you look for it.  However in our day, it's too.... too much for the PR department I suppose.  Or it simply isn't happening.

Referring to the message from Pres Monson.  When confronted with a problem the President of The Church of Jesus Christ of Latter Day Saints says he always looks at an image, and asks himself what would Christ have him do.  Call it a matter of "wording" but hopefully he asks Christ, not himself, what Christ would have him do.  I almost have to pose the question: Is there much of a difference between usage of this picture, and having a statue of a catholic saint on your desk?  I mean this about any of us, and with no disrespect.  Some people consider gazing on a statue or image and pondering to themselves "praying to a graven image".  Others of course would point to some other behavior like physically bowing your head as praying to a graven image, rather than an inclination to frequently gaze on a representation.  Interesting to consider both sides.  I make no conclusion, only offering something to consider.

After reading the Facebook post it did seem troubling that no mention is made of searching the scriptures, no mention is made of divine revelation.  He "always" gazes on an image.  Those are his words, not mine.  Perhaps revelation does happen, perhaps he does search the scriptures.  We are left to either assume, or to read between the lines. Of all the things to NOT mention, and of all the things a prophet would directly mention to the world.  The image itself and the question asked while gazing on it lead to clarity and direction.  That does somewhat contrast with Joseph Smith's comment about how a man would learn more by gazing into heaven for 5 minutes than reading all the books ever written on the subject.  He gazed into heaven and openly declared to the world that he saw Christ and and Father and spoke with them as one man speaks with another.  Political correctness was not his guiding principle.

What the prophet says, and what we presume about him, are often different.  I believe what he says, when confronted with a difficult decision or a vexing problem he always gazes at a picture.  I don't think he is lying.  The below picture by Carl Bloch to be specific.  I also believe what Joseph Smith said, that he did in fact see and converse directly with God.  I don't think he was lying.  He went so far as to teach and promote that others do the same.  I really like Joseph Smith's example (James 1:5). 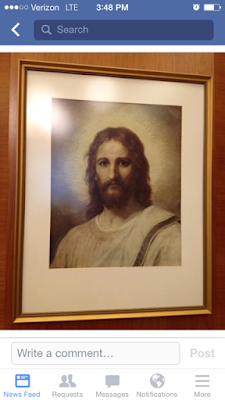