When the wicked rule

The old testament has this timeless wisdom: When the wicked rule the people morn.

When we think of those who rule it's typically those in power whether governmental, economic, religious, or any with power and some form of authority.  Which of course it is.  But lately it's become more apparent the media can also rule the public perception.  And even sometimes rule or manipulate those holding power.

The public too can also rule in many ways.  They can demand reform, and demand change and force an agenda or manipulate with fear causing even more chaos and destruction.  There are many who appear to want to rule and reign with (utilizing) blood and horror as an effective platform to gain listeners.

Anyway, many companies in America are putting out public statements regarding racism.  The Church recently put out a statement about racism.  This is from the Church News:


“We abhor the reality that some would deny others respect and the most basic of freedoms because of the color of his or her skin. We are also saddened when these assaults on human dignity lead to escalating violence and unrest.”

President Nelson’s message addressed the death of George Floyd — a black man who died on May 25 after a white police officer knelt on his neck while restraining him — and ensuing protests, riots and violence.

These statements condemn the Church's own past leaders and past doctrine at times.  Completely contradicting and "abhorring" (their word) past leaders.  From whom the current leaders have inherited their claims to priesthood authority.  But that is another matter.

While the world, CEO's, businesses, and heads of religion issue public statements in the wake of the death of George Floyd (I'm sickened too); I couldn't help but notice the way George died is not unlike what happens all the time as part of a later stage abortion of a voiceless, powerless, restrained infant.  But where is the LDS statement? Where are the protests?  Outrage?  No CEO and brand owner public statements?  How many thousands of voiceless babies die this way?

The public is furious about one issue, meanwhile this other great cause of death which happens in strikingly similar fashion continues with those who lives have been reduced to less than human, and who don't have a voice at all.  It's horrific to me that life ends this way.  It's also horrific that women are sometimes driven to these dreadful extremes, perhaps by no fault of their own. If this topic had protests and outrage and demands for reform to the same degree as these other things we would likely see change.  But this greater cause of death gets far less focus, despite there also being videos available showing what happens.

In looking for a recent LDS public statement on abortion I did find a statement that had no date.  The Church does oppose abortion and they clarify their stance on some of the complexities surrounding the topic.  But the concluding statement on the newsroom page about abortion says this:


"The Church has not favored or opposed legislative proposals or public demonstrations concerning abortion."

What kind of statement is that? For one, it is demonstrably not true.  But besides that, are they afraid to have taken or take a public stand or give support of legislation on the issue?  I wonder on what grounds a Church claiming Christ's name fails to speak clearly on issues that involve the death of children.

But in any event, with the potential for such enormous public backlash companies and businesses and even religions seems to be trying to playing it safe.  Statements without dates, and electronic handbooks also have the added advantage of being able to be easily altered and adjusted as social pressures come and go.  Part of me seeks and wants someone to cut through all the distractions, and boldly and plainly not play it safe, or cater to public approval, but simply state the truth.

The LDS church used to mention abortion but it's obviously not a popular thing for a worldwide religion to openly and outwardly speak about.  It hasn't received received near the attention as decades past. 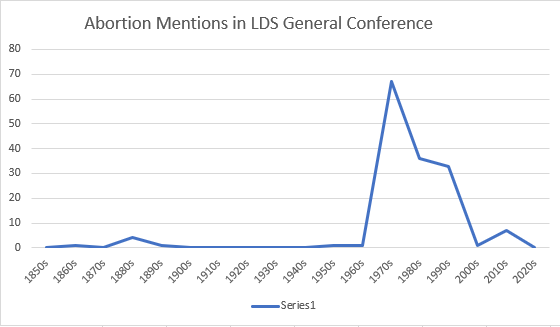 But moving on. This next statement was from a talk given in Hurricane Utah in March 2020.  The entire talk is a very worthwhile read.


But our society suffers most from evils we inflict upon ourselves. It is estimated that in January and February of this year the greatest cause of death in the United States has come from one of our great evils of abortion. An estimated 141,000 abortions in those two months, added to the estimated 51,000,000 slain since 1973. Abortion is the leading cause of death in the US. By tolerating this mass killing we are not unlike those who anciently killed their children sacrificing them to the false god Molech. The Lord repeatedly condemned this:

“that no man might make his son or his daughter to pass through the fire to Molech.”

“to cause their sons and their daughters to pass through the fire unto Molech, which I commanded them not;”

What kind of a society allows killing 51,000,000 innocent children to continue uninterrupted over 47 years? As we have been told, “Nevertheless, when the wicked rule, the people mourn. Wherefore, honest men and wise men should be sought for diligently, and good men and wise men you should observe to uphold; otherwise, whatever is less than these comes of evil.” We have elected and upheld men and women who have tolerated this obscenity for 47 years. The United States will be punished for this. By and by you will see the “chastening hand of an Almighty God, until the consumption decreed has made a full end of all nations.” That full end of nations will include the US. And so we have an opportunity to prepare, if we will heed the Lord’s counsel.


This is one of the more memorable times I've seen a societies evil pointed out like this, and such a warning given.  "The United States will be punished for this".   Going on to quote a revelation given to Joseph Smith referring to a full end of all nations.  The footnote reads: Scriptural “destruction” does not require annihilation, only the loss of an ability to perpetuate a nation.

I'm not a doomsday-er but this looks more and more like what is up ahead, hopefully far far up ahead but ahead nonetheless.  We're told we have an opportunity to prepare.  And that it has to be by heeding the Lord's counsel.  Makes me want to find out what that counsel is, and where it can be found.
Taylor at 6/09/2020
Share